Italy has a number of very beautiful railway lines and some preserved locomotives and wagons. The rules for chartering trains on the state railway, FS, however, differ from many other European railways. Prices are high and, hence, serviceable steam locomotives rarely run.

Besides the well known narrow gauge railway on Sardinia and the equally well known problems of chartering trains on it, there is a standard gauge locomotive,740 423, and some beautiful slam-door coaches (compartment coaches). Combined, they form a nice looking, authentic charter train. 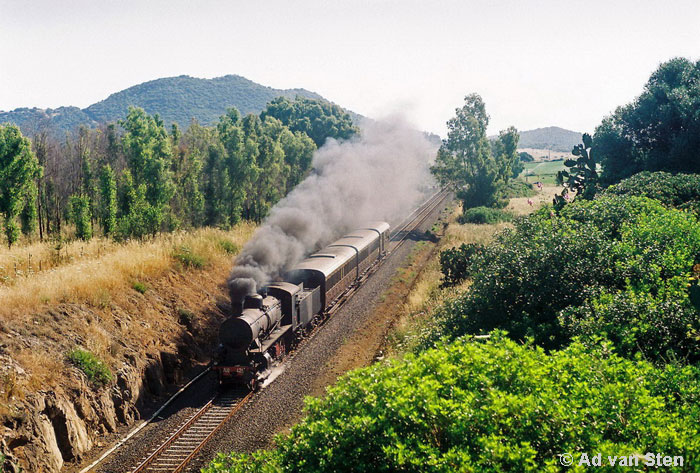 The 2-8-0 class 740 was THE classic Italian steam locomotive which was used for freight as well as passenger service. When FS was formed in 1905 their engineering office in Florence surveyed 12 classes of steam locomotives designed to fit all their needs. At that time, the compound engine was in favour over the simple expansion locomotive and hence most Italian locomotives were built as compounds. But only a few years later, as superheated locomotives proved their advantages, they created a new all round locomotive; the superheated, simple expansion class 740.

Between 1911 and 1923 they built 470 locomotives of this class. Hence, the 740s were by far the most common locomotive in Italy. While other railways built much larger numbers of some classes, the demand in Italy at that time was much lower due to the smaller railway network, the lower level of industrialisation and last but not least the early electrification of major trunk lines.

The class 740 was used until the mid 1970s. Several locomotives escaped the cutters torch. A few of them are serviceable today. Since 2008 Sardinia has had one of them: 740.423. Unfortunately it runs only occasionally.

The first section Cagliari – Decimomannu (16 km) is electrified. From Decimomannu to Carbonia the line heads west and then south. In the eastern part, the line is rather flat, but beyond Villamassargia you’ll have some mountain ranges as a backdrop. It’s not among the most spectacular lines of Italy, but it’s also not a boring flat one. At the terminus in Carbonia Serbariu you’ll still find a “turning star”, where our locomotive will be turned. Only three stars remain in Italy, and the star at Carbonia Serbariu lives on borrowed time. FS want to sell the area where the star is. Turning stars were built where the available space didn’t allow a turning triangle. To build a star is cheaper than a turntable, hence you found many of them all over Italy. On Google Earth you can see the star of Carbonia clearly. 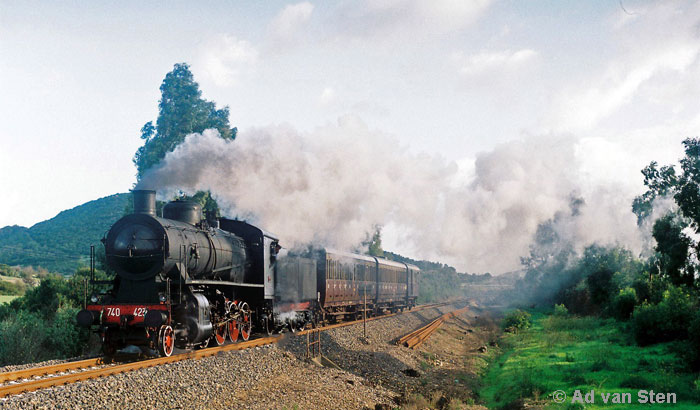 The branchline to Iglesia leads straight through the countryside and offers no highlights. But the line has a gradient, so we expect to get one good shot on this stretch. The loco can’t be turned at the terminus.

Classic photo stops where the train pushes back on the line and passes the group of photographers with fully open regulator are not possible. That’s why we didn’t plan to travel on the train – instead we’ll follow it with hired (self driven) minibuses. The timetable is made for chasing the train without the need to violate traffic rules. Our train will stop at every station to give us time to get to the next position.

We strongly recommend the use of one of our chartered minibuses. To charter a big bus makes no sense because we will need to go over small, unpaved roads to get to some of the positions. To hire your own small car should be avoided. You’ll very likely not get any additional shots, but many small cars on the narrow ways we’re using may very likely lead to a parking chaos (given we’re in Italy) which will prevent us from departing soon after the train has passed. This will result in everyone getting fewer shots. 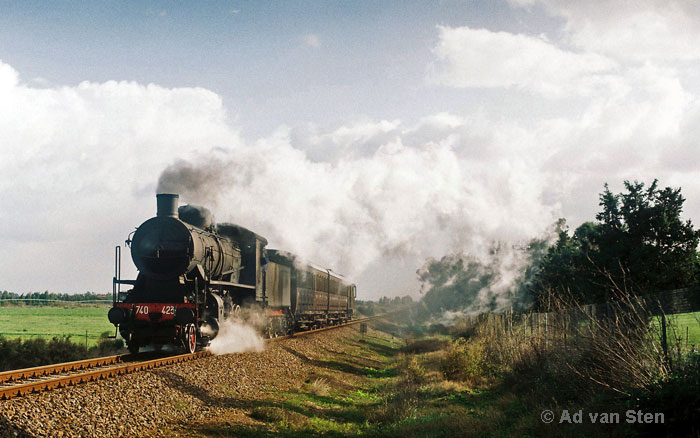 April 21st will be a long shooting day. Arriving and leaving the same day is quite impossible unless you live on Sardinia. We ordered two nights in a good hotel for our group. You do not need to stay together with everyone else. You can find cheaper accommodation if you want.

Please remember that we’re not going to an Asian country where railway lines are considered to be public walking ways. In Italy you should cross tracks only on public crossing points like level crossings. FarRail Tours will not pay your tickets for crossing rails, parking wrongly, exceeding the permitted speed and so on. FarRail Tours cannot be held responsible and will not accept any liability whatsoever in the case of any accident, damage or delay. We suggest you take out a comprehensive overseas accident and health insurance policy.