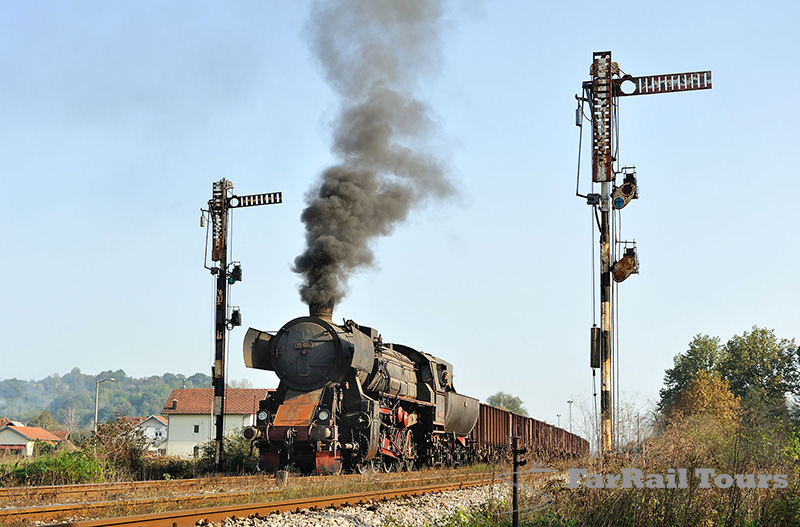 The economic situation of the coal mines in is so dire that for many years not even the purchase of second-hand diesel locomotives could been considered so they had no choice but to keep their steam locomotives in active service. It’s a “miracle” that even in 2022, ‘Kriegsloks’ can still be seen in daily service. However, their operating radius is severely limited as they only shunt in the mine areas, now that the trains to the interchange yards are in the hands of state railway diesel locomotives.

In Oskova (Banovići) the narrow gauge railway still sees shunting services with the class 83, the legendary 0-8-2s, typical for many narrow gauge lines in the Balkans. In addition, there is still the occasional use of the American war-time locomotive of class 62, the USATC class S 100, in the standard gauge section of the station. The 0-6-0 tank Škoda locomotive is also still operational.

We are visiting the last steam locomotives in genuine use, (i.e. the last non-tourist steam) in . However, since shunting operations alone are not very productive photo-wise, we have chartered a series of special trains to take the locomotives onto the beautiful lines around the coal mines. So we can enjoy the open and mountainous countryside as well as action set against industrial backdrops. Also of interest are the railway stations, as some of them have remained almost unchanged for decades.

We will see four different types of construction in operation: 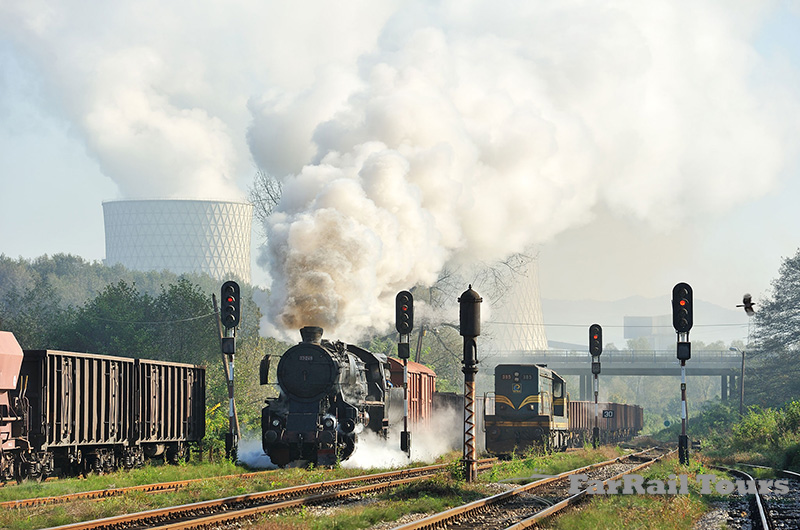 The tour starts and ends at airport, which is served by Wizzair from several countries. The day of arrival is April 9th, 2022, the day of departure is April 16th, 2022. The times of arrival and departure do not matter.

We only run freight trains as specials. We will travel in a Gbs (two-axle, covered freight wagon).

The administration of the Kreka power plant (and some of the coal mines serving this power plant) is in . The depot for all locomotives used in the mines is located in Bukinje, close to and next to a now closed deep mine. Here we will meet the last 2-10-0 war locomotives of the German Reichsbahn class 52, the Yugoslavian 33s. There are also some long dumped 62s in the depot. Locomotives of the class 33 are still used for shunting duties in the coal mine stations in Dubrave and Šikulje, both open cast mines. We’ll visit the locomotives in the mines and watch them shunting. The surrounding railway lines are leading through a mountainous countryside and offer some nice photo opportunities. To take pictures on these state railway lines we’ve chartered freight trains. We’ve also planned some night photography. 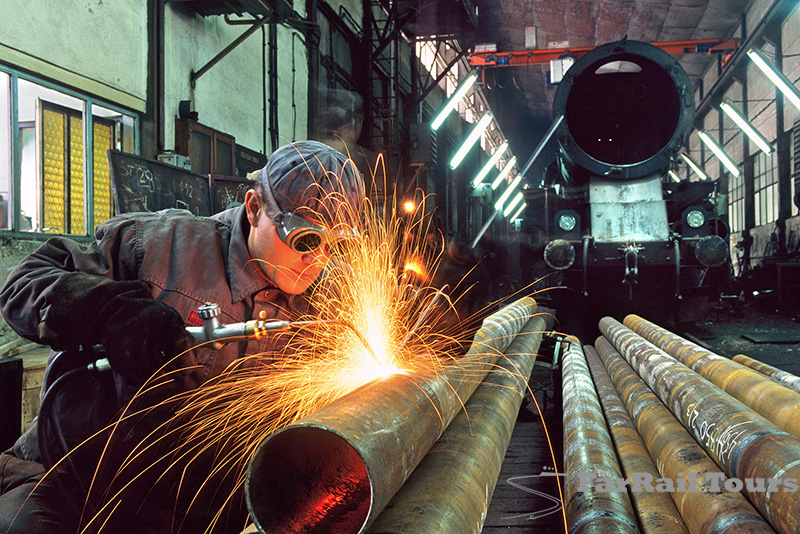 The workshop for heavy overhauls is in Bukinje. It is difficult to predict whether or not one of their locomotives will be under heavy overhaul when we visit the site. However, the chances are not bad, as an overhaul usually takes many months. This is because of the low number of maintenance staff available. 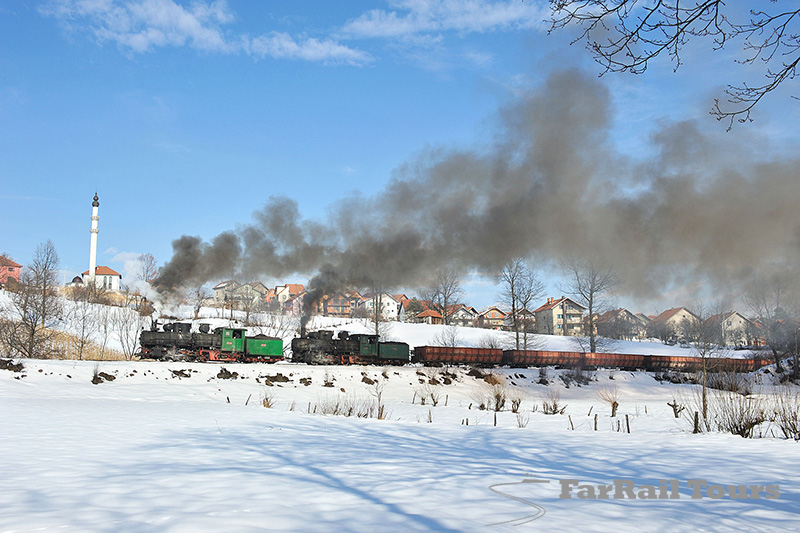 In Banovići, the coal mine still uses steam locomotives on the Bosnian 760 mm gauge to shunt trains at the lower terminus of the line in Oskova. The line service to the mines will be performed by diesel locomotives. On the standard gauge, they use steam only occasional. Usually a diesel does the work. We chartered a steam locomotive to replace the diesel for our visit. Besides their lass 62, the last serviceable in , we have also chartered the Škoda locomotive (class 19), and will use it for shunting operations. Furthermore, there is a 144R (0-8-0, Fives, ) in desolate condition. Class 83 (0-8-2 from Slavonski Brod) and, if available, class 25 (Ch2t from Škoda) will be used for shunting on the narrow gauge line. Currently, no class 25 is operational, but two class 83s are. The diesel locomotives classes 720 (B-dh) and 740 (B'B'-dh) handle all traffic on the double-tracked narrow-gauge line. We have arranged a double headed charter train on the scenic narrow gauge line, using both class 83s. This type of locomotives could be found all over the former on various narrow gauge lines and was in use on the Banovići coal railway for many years.

Bosnia-Herzegovina is a civilised country with a hospitable population despite their difficult history. Perhaps, their mentality is different from the rest of , but remember we go to the Balkans aware their very different historical background.

Taking photos of railway facilities, engines and rolling stock is sometimes still seen with some suspicion. We therefore have will apply for a permit for each location. As soon as you show up with an official permit, all the gates and doors usually open and you are warmly welcomed, allowed to take photos everywhere and there is even extra shunting possibilities once in a while! 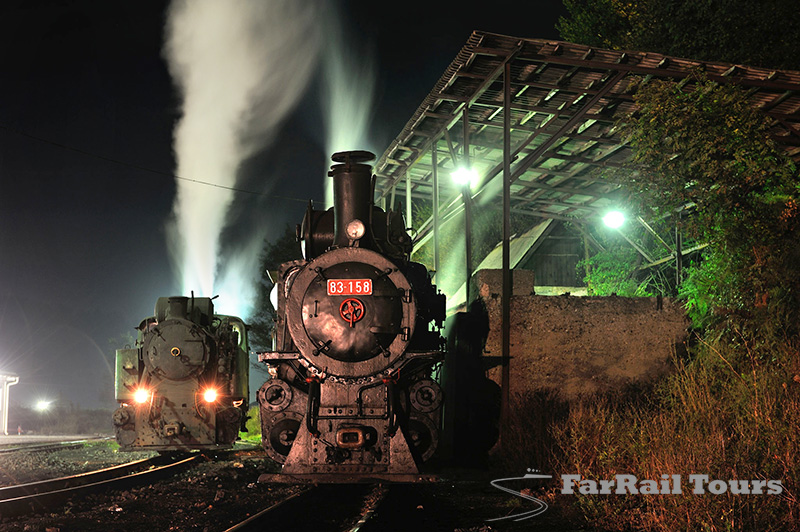 Bosnia-Herzegovina was “ethnically” divided after the civil war, but we will hardly notice the border to the “” as there are no check posts or other border controls. The hotels may leave something to be desired in some places. Tourism has not yet really got going again after the war and the division of the country, so investment in a tourism infrastructure in the coal-mining areas is not high on the list of priorities. However, the food supply is plentiful and good even if vegetarian food is somewhat more difficult to find because meat in all its variety is the major part of almost every meal.

Citizens of the Schengen countries and only need an identity card to enter the country. However, we advise you to carry a passport with you, because we sometimes need the passport number to obtain the permits at the coal mines. Also at the border, many officials prefer to see a passport.

Charter buses, as on all our trips, apply to the local standard, which may differ from EU expectations, but they are always quite comfortable and safe. 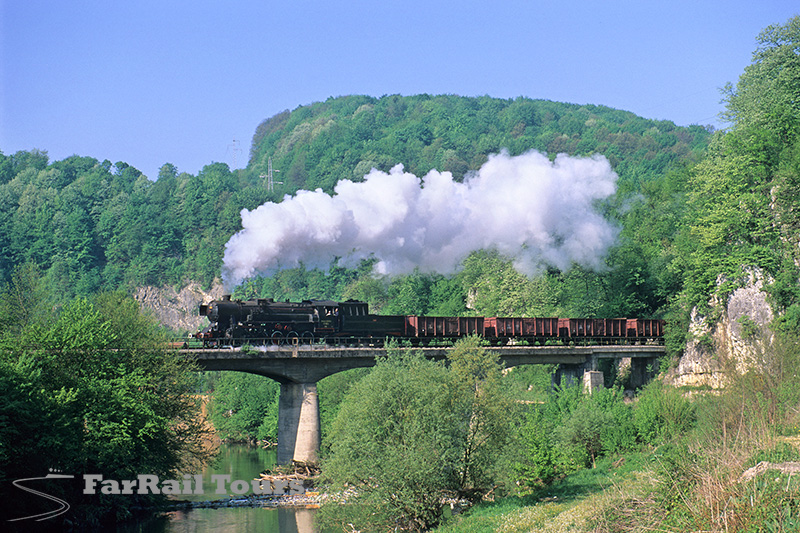 You should allow for rain. Please bring clothing to cover bright blue skies and rain and temperatures in the range of plus ten to plus twenty five. You may choose to bring a tripod and remote shutter release as at some locations we hope to capture atmospheric night shots.

The trip is specially designed for photographers and videographers for whom a good picture is more important than a sumptuous meal in a top restaurant 50 km away. We have planned on half board, but we will hardly have time for lunch. 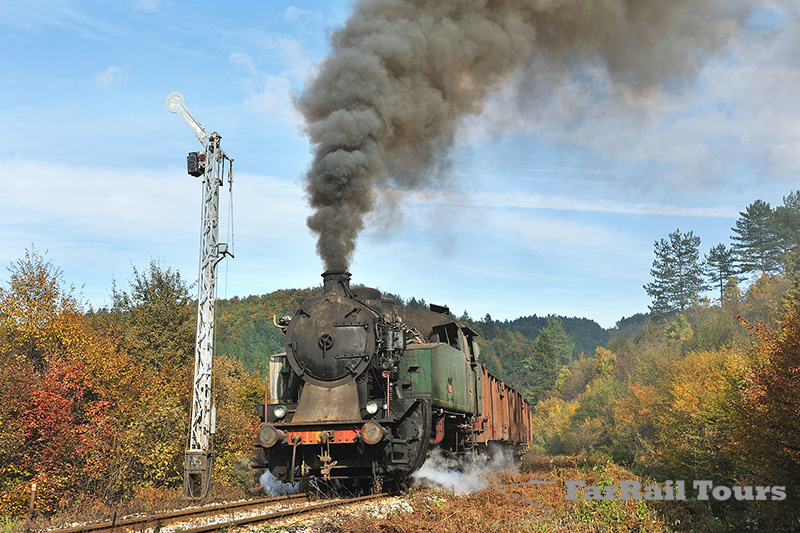 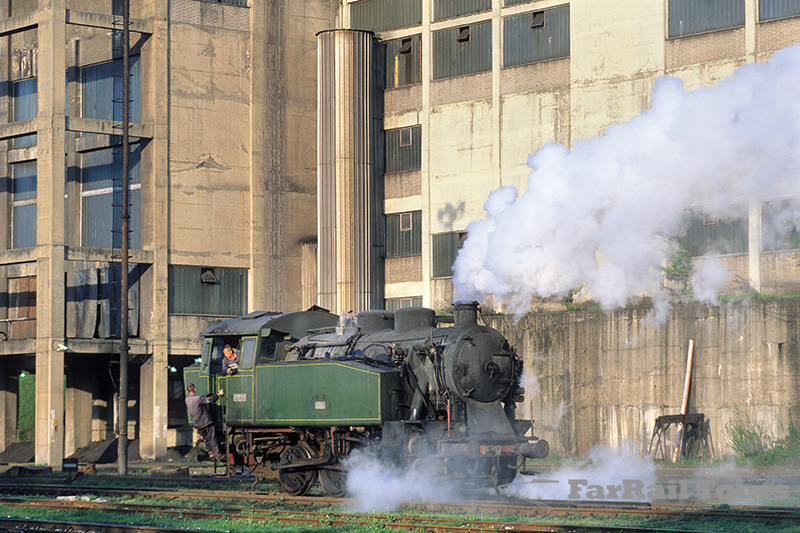 When we visit the scheduled operation, there are sometimes longer waiting times until a shunting movement takes place. The locomotives can stand much more than they move. However, we can always help things on a little. Since there is only one operational example of each of the 19 and 62 series, it cannot be ruled out that we may not see the very locomotive or even no steam locomotive at all. We will then try to find an adequate compensation. However, there can be no financial compensation for steam locomotives that do not run. We are in the age of fading steam activities; the risk of a total failure of steam at one place or another cannot be ruled out. But of course this is not our first trip to the Balkans, and so far it has always been very worthwhile. The only risk-free place is at home sitting on the sofa! Only that's not half as exciting! 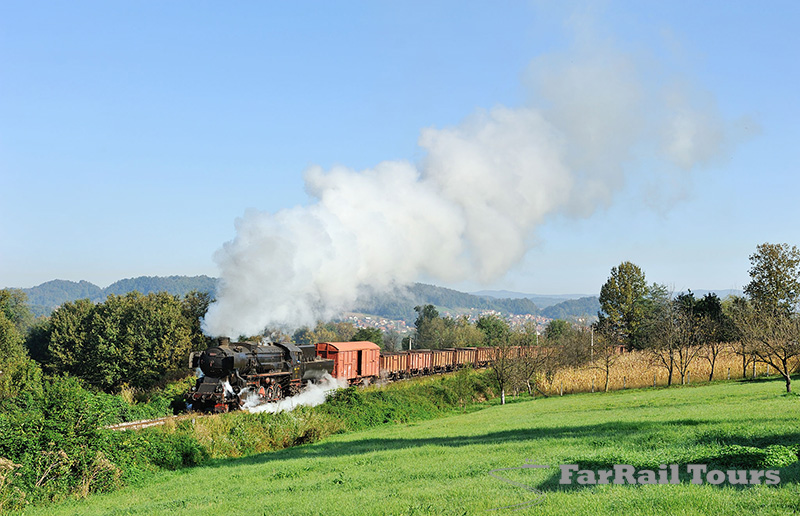 Please note that hotels, buses and even the trains do not have to be EU-compliant. That is why we are travelling there. We will be travelling to a country where environmental and health and safety concerns are still not fully developed. It is important to point out the dangers of using and staying near the railways and other means of transport. It is recommended that you take out both accident and health insurance. The Kreka Mining Company, the Banovići Mining Administration, the local organiser nor FarRail Tours are liable in any circumstance for accidents, damage or inconvenience resulting from delays, etc.

At the moment, entries for persons vaccinated against Covid are not a problem. We will have to see what the rules are then shortly before the start of the trip. The Omicron wave should have passed over by then. Wizzair, the airline that flies to , has not yet published their final flight schedule to in April. It is therefore possible that we may have to adjust the tour dates by a day or two, should the frequency of flights in April be below that of January 2022. 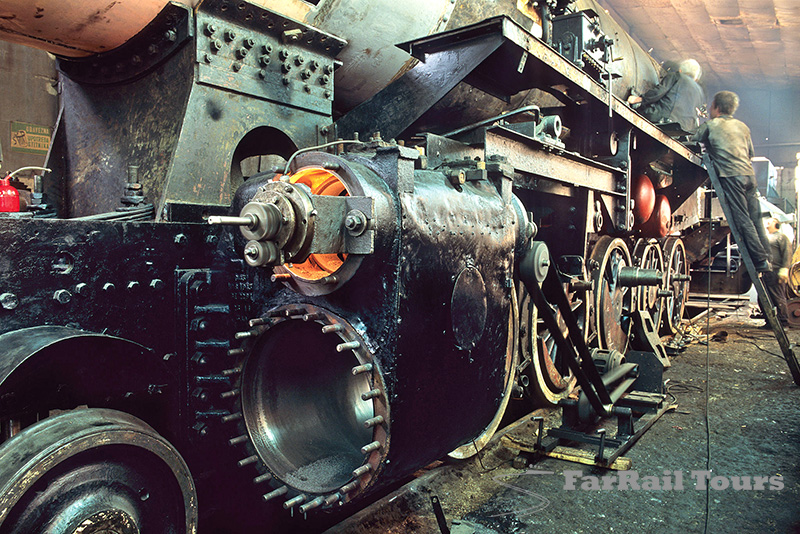 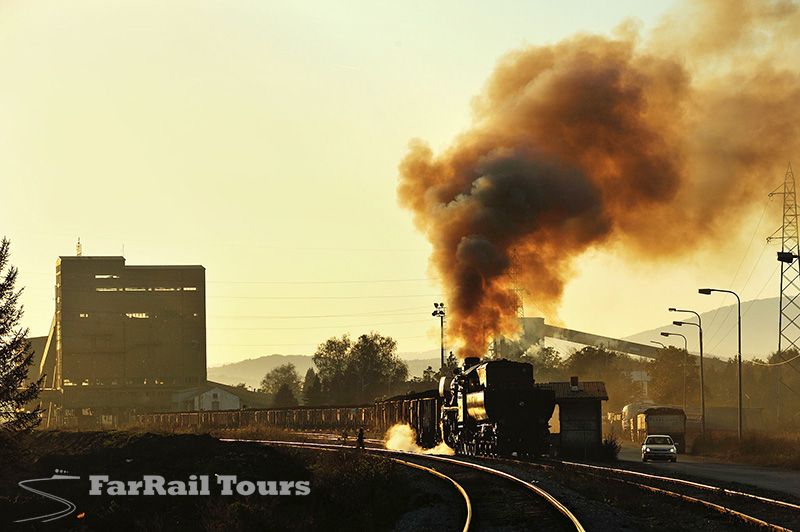