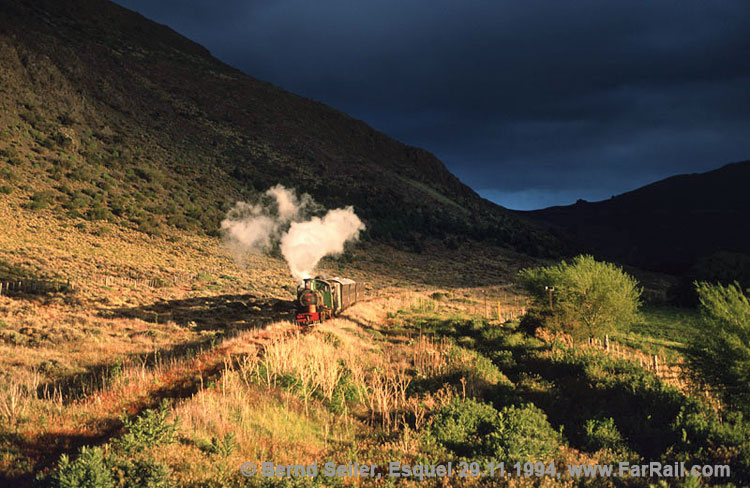 La Trochita – tiny gauge – as the locals call their 250 miles long narrow gauge railway in southern Argentina. Compared to the broad gauge line to San Carlos de Bariloche the 750 mm gauge appears to be really small – but La Trochita is the longest narrow gauge line in the world which allows the charter of steam trains over its full length.

The line is sandwiched between the endless planes of Patagonia and the high mountains of the Andes, South America’s predominating mountain range. Combining the rapid weather changes between dark skies, looking like the end of the world, hail showers and crystal clear, deep blue skies, you’ll find an enormous range of impressive situations and photographic opportunities which cannot be found on any other steam railway in the world. This railway is unique in many respects, nothing compares to it. This doesn’t apply to the line alone, but also the enormous task of arranging authentic looking trains here. Sure, we have to admit that our target was tough - no-one before has asked for what we asked for. That’s why we are not just selling tickets for another operator’s tour, but are offering our own programme for dedicated and demanding railway photographers and video film makers. All this means, for instance, that we’ll try to remove tourist decorations from the train and includes the repainting of tenders to change them from “The Old Patagonian Express“ or “La Trochita“ to “Ferrocarriles Argentinos“ again. 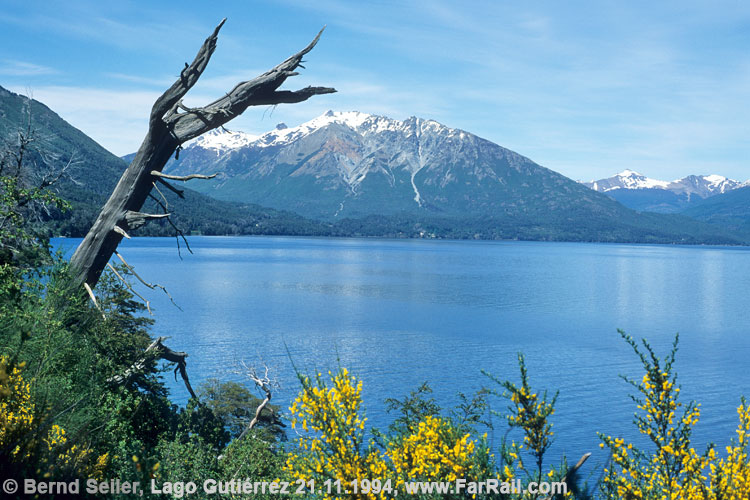 Apart from our railway activities which are almost entirely focussed on taking the perfect shot, we’ll also visit national parks near the railway and have a break to inhale the countryside.

The enormous difficulty in arranging all this makes us fear this will be a standalone tour which might never be repeated. We must expect that the northern part of the line won’t survive for long. Too few charter trains on this section will not allow the maintenance of this part. 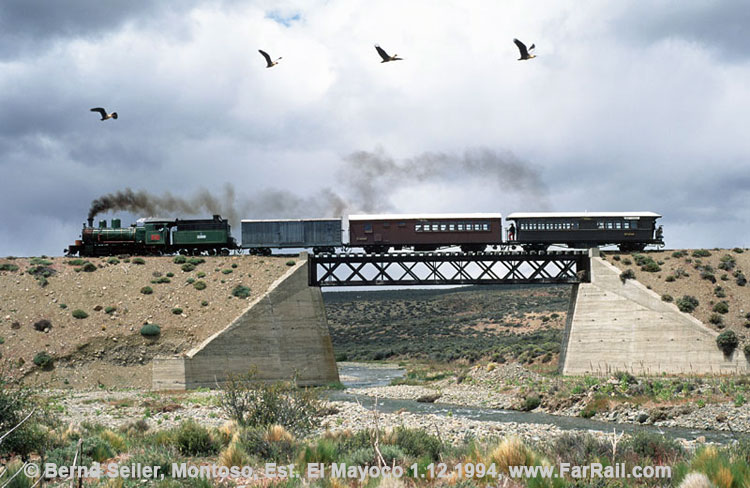 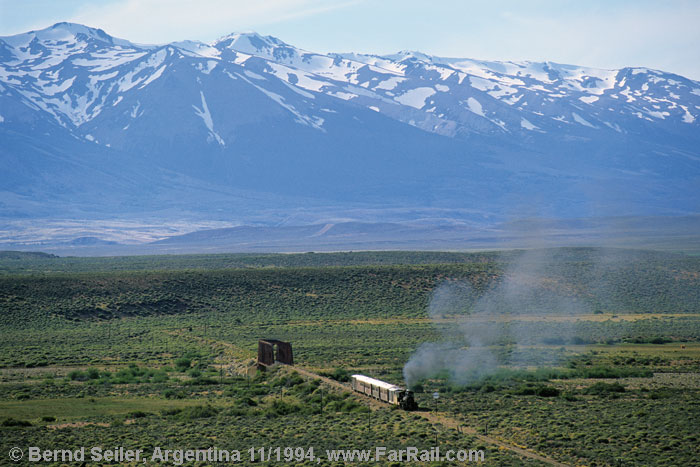 In 2011, on the southern section, the Baldwin built locomotives no.1 and 16 were serviceable, no.4 was under repair and the Henschel built locomotive no.107 was under overhaul. The latter loco should be available for our trains in 2012. After a heavy accident in April 2011, we can’t guarantee, that no.16 will be repaired by March 2012. On the northern section only Baldwin no.3 was serviceable, but Henschel locomotive no.104 was close to being ready, after a heavy overhaul. It’s very likely that this loco will be under steam by the end of 2011. 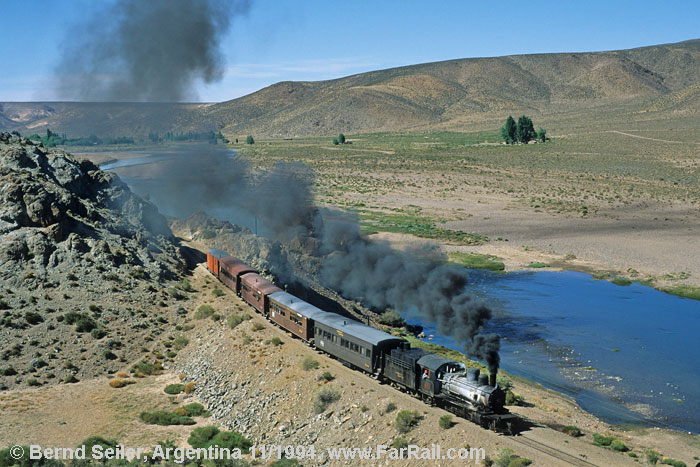 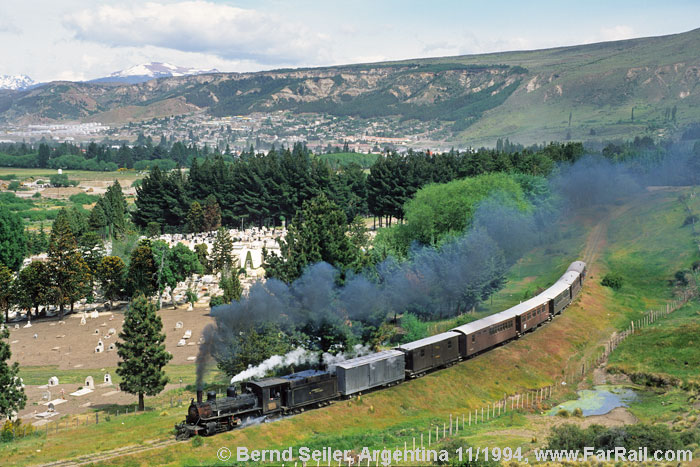 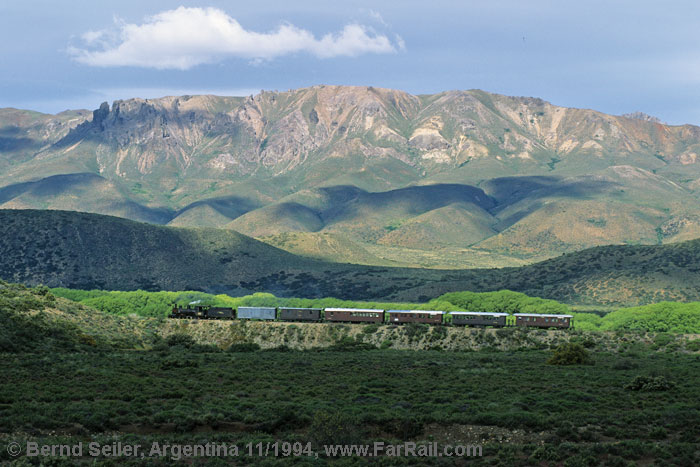 The railway was built to give the remote parts of Argentina access to the economically developed north. Before World War I there were plans to connect Patagonia to the growing railway network. However, like many other things in southern America, it took longer than estimated. The first locomotives were purchased 1922, a huge number for a then non-existent railway. They ordered 25 2-8-2- locomotives from Baldwin, USA, and 56 from Henschel, Germany. The latter manufacturer delivered 50 2-8-2 locomotives, four 0-6-0 tank engines (saturated steam locomotives for shunting purposes) and two crane locomotives. The railway track was then laid over 20 years between 1925 and 1945. The long 750 mm gauge line was probably never economical. But its route runs through grandiose sections of untouched countryside. From the railway, you have spectacular views of the Andes mountains, up to 2,500 metres high, plus wide valleys and endless grasslands. 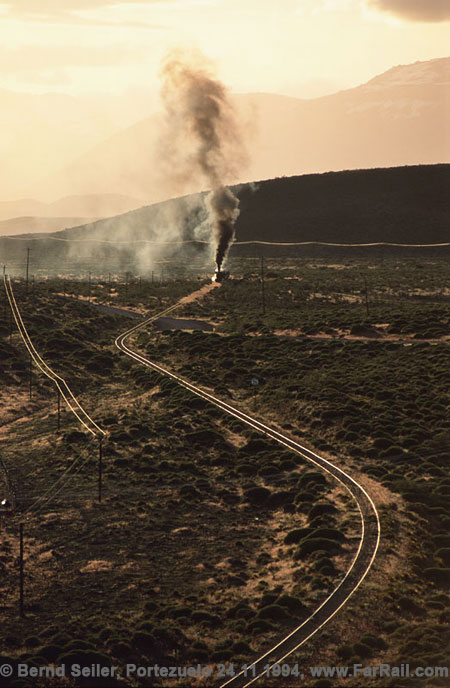 From the 1970s, the always sparse freight traffic was taken over by road competition, although at that time most of the roads in that region were still unpaved gravel. Nowadays they have asphalt roads to Esquel but not along the northern section of the railway. The weekly pair of passenger trains, however, became more and more frequented by tourists coming to see this superb railway in this very remote part of the world. The state railway wanted to rid itself of this loss making line. By the mid 1990s, the state railway finally handed over the complete line and rolling stock to the provincial governments of Río Negros and Chubut. Shortly afterwards, the regular passenger service was suspended. The provincial governments realised the tourist potential but didn’t initially have any idea how to develop or promote the line. For many years it lacked the necessary money for investment. The northern section between El Maitén and Ing. Jacobacci was in such a bad state that trains were temporarily stopped altogether.

From Ing. Jacobacci the line heads first south-west and turns towards El Maitén to the south. West of Río Chico you’ll find the one and only tunnel on the line. To both ends is a deep cutting and close by is the longest steel bridge on the line (105 m long). In other parts, the line offers exceptional long distance views across typical Patagonian countryside towards the mountain range of the Andes. Along the way, you’ll find almost abandoned stations, water stations, small and medium sized bridges, many, sometimes challenging gradients and beautifully shaped S-curves. By the way, the FarRail logo was modelled on a picture from one of these S-curves on La Trochita!

The weather in Patagonia may prevent some of our ideas for photos, but on the other hand it can be a key factor in getting superb shots of dramatic lighting situations, when dark clouds fly over the Andes while the sun sends intense rays below the clouds and gives our train a glint in front of a black background. It’s very windy in this part of the world and the weather can change within minutes. You should never call it a day because of the weather until the very last light has gone. The most impressive pictures may just be waiting for you shortly after sunrise or shortly before sunset. 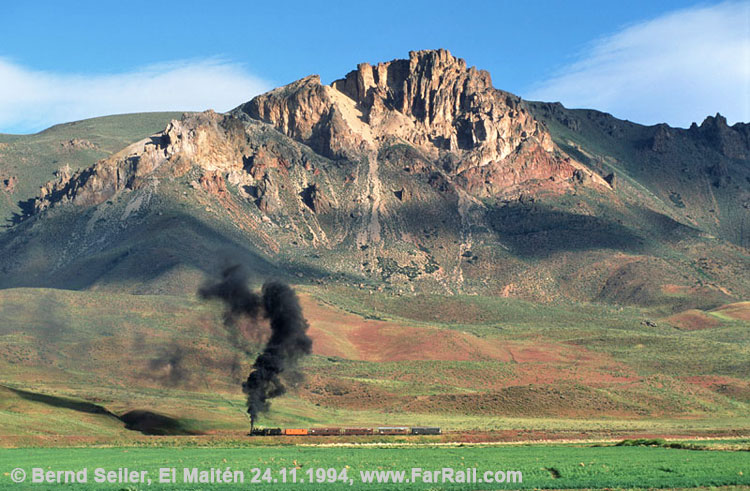 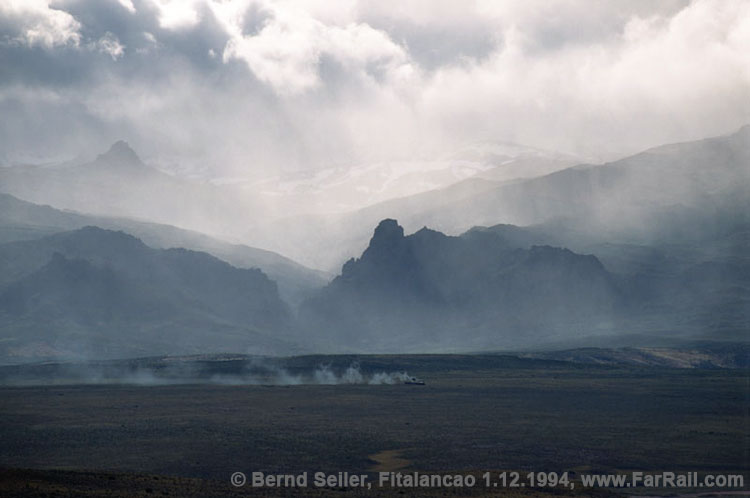 While there was a continuous tourist service between Esquel and Nahuel Pan on the southern end of the line (Esquel is a small town which has seen tourists for decades) the northern part saw only sporadic charter trains. The marketing for charter trains was (and you may say is still) bad on both sections however. To organise this tour several local travel agencies were contacted – and failed miserably. It took around four years to arrange the tour as we want it! For a long time it seemed it was impossible to reach an agreement to run authentic trains. Even now as we have their agreement, I still have a gut feeling that not everything we ordered and paid for will meet our demands and wishes. It could be that they’ve said yes to a certain arrangement but will do nothing. We and they know that we’ll not fly that far and just return if something doesn’t look as it did in “Ferrocarriles Argentinos” times. Please be prepared that not everything will run smoothly like a Swiss clock. Expecting the worst and hoping for the best is the approach to make this tour an enjoyable one for you. 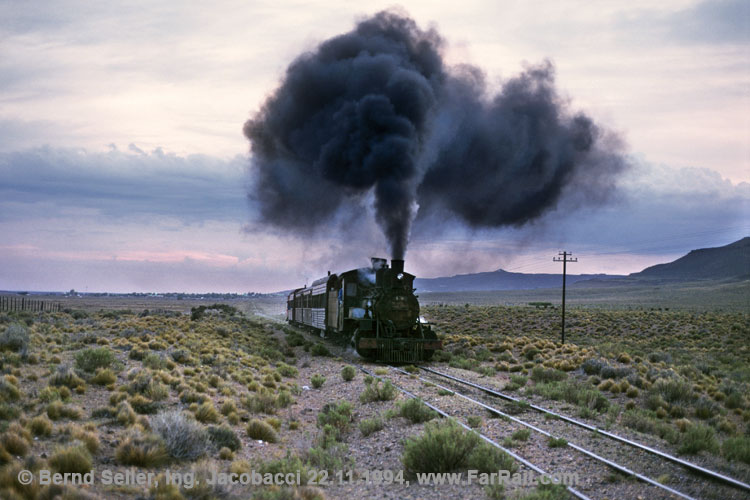 We completely depend on the good work of third parties and have arranged the tour in trust. Hence we cannot guarantee anything other than we’ll always try to make things happen the way we want. There is no reason to contact a lawyer if something doesn’t work out as planned/hoped/wished or if trains don’t look as we ordered them or if locomotives fail or derailments occur, etc. You need to live with the risks if you want to take part in this event, and by registering you accept this as given. From our experience with many other not-so-easy-to-arrange-countries, such as Brazil, Paraguay, Cuba, the Philippines and North Korea we know that it’s very likely we’ll get what we want in Argentina as well: excellent pictures, intimate views of the local life and many great impressions.

Recently the northern section of the line was checked over, and two Henschel locomotives are close to being serviceable again, making it even more worthwhile to visit this southern gem right now. However, we had many wishes which will not see reality because of the high prices quoted in Argentina. We know this tour is no cheapy, but we feel the result will justify the effort and expense. The intercontinental and domestic flights are long and expensive. In Argentina, hotels even in minor cities or small villages cost more than a medium class hotel in central Europe. But when someone in the province of Río Negros realises that investing much money in track refurbishment and overhauling locomotives still won’t bring the number of tourists needed to justify the effort or pay back the investment, it’s probable that this northern section won’t have any future as a tourist line and may well disappear from the railway maps. For that reason we’ve decided to try the almost impossible now and arrange authentic looking passenger trains and freight trains in which we’ll sit on emergency benches in a box car. We’re not talking about some pictures here and there. The usual tours allow maybe three or four pictures on the line I was told. For us, they’ve agreed to some 15 to 20 photo stops along the line, but only with a 50% increase in the normal charter fee. 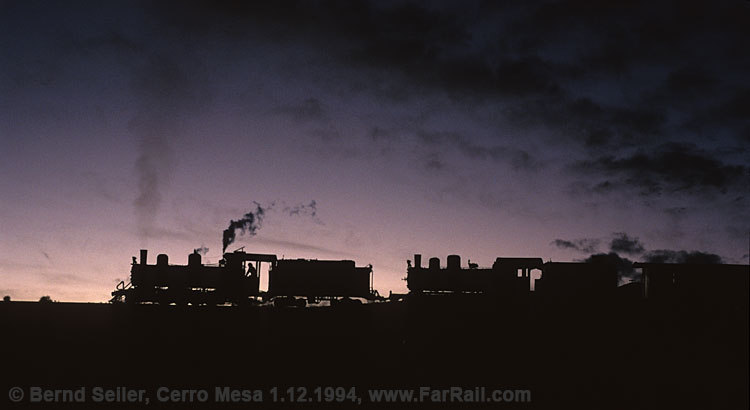 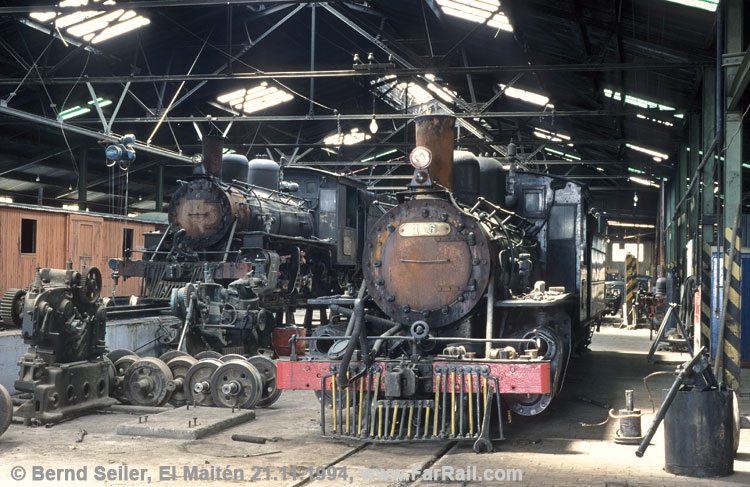 As mentioned above, we do not sell tickets for an American railway travel agency. We try to work to FarRail standards against all resistance on a difficult playground. We will – as usual – consider the trains and daylight hours rather than fixed dining times or four and five star accommodation.

Argentina is a safe country to travel in. However, you should always use common sense when crossing roads and railway tracks and consider the risks while taking part in any kind of travel, especially near or on trains. You’re travelling and taking part at your own risk. No risk is covered by any insurance, the hotels do not pass an EU-safety check, the quality of the water is not regularly checked as we’re used to it in Europe, Australia or North America. The railway in Argentina is in many respects dangerous compared to west-European standards. Do not book this tour if you expect to find a perfectly operated railway using European safety standards! FarRail Tours cannot be held responsible, and will not accept any liability whatsoever in the case of any accident or damage or delay. We suggest you take out a comprehensive overseas accident and health insurance policy.

The area of San Carlos de Bariloche and Ing. Jacobacci might be still affected by the ash from the Chilenean volcano.

Travellers from most west European countries do not need a visa to travel to Argentina. Please check with your local embassy. A valid passport is required, however.

If you want to drive one of the hired cars on the extension you need an international driving licence. 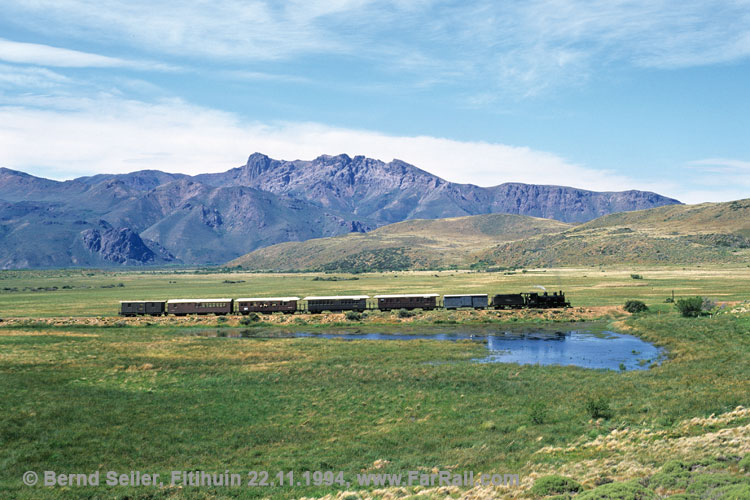 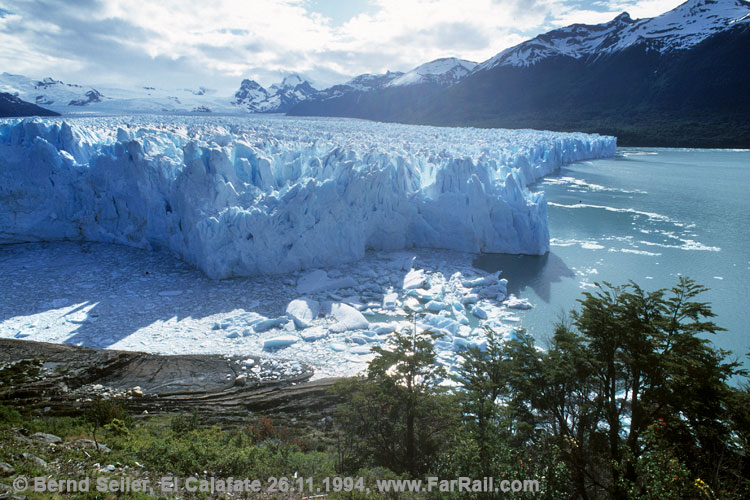 The payment rules for this tour are different from our general terms. The deposit for the tour is not required within two weeks of booking. Instead, you'll receive an invoice after we‘ve reached the minimum number of participants and the tour is, therefore, confirmed. Then you‘ll need to pay the deposit which for this tour is 410 Pounds or 460 Euros. This will be a non-refundable deposit because we have to pay a non-refundable deposit to Argentina as soon as we confirm the tour. An invoice will be issued later for the balance of the cost, as is normal with our tours.

“Land Only” means the tour starts in Esquel and ends in San Carlos de Bariloche. Extension price is given as a land only price excluding domestic air fares.

Supplement for departures from other airports (please ask for other ports of departure):

As a service to our UK-based clients FarRail Tours accepts and will continue to accept payments made out in Pound Sterling until further notice. However, please note that all prices quoted in Pound Sterling are indicative only and are subject to change without prior notice. This measure was taken by FarRail Tours due to the unprecedented volatility in the international foreign exchange markets and its impact on the valuation of the Pound Sterling versus other major currencies, namely the Euro as FarRail Tours' accounting currency. 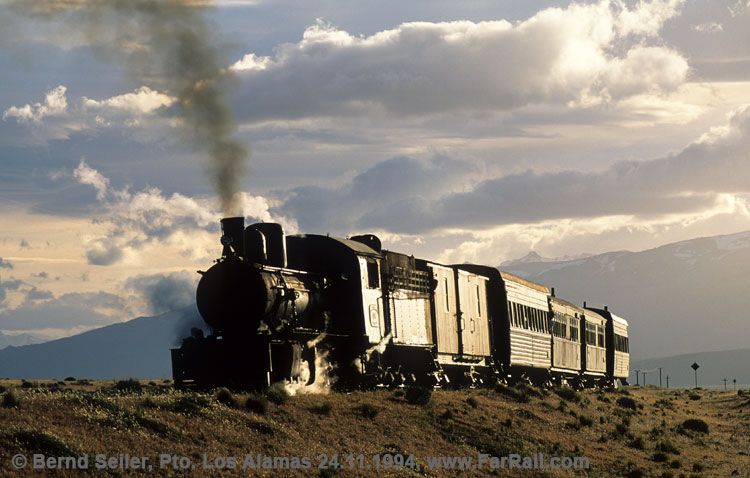