The end of the main line as a photogenic gem with semaphores, gantries and half-timbered signal boxes is NOT the end of the exciting opportunities available on Burmese tracks! It is true that Myanmar Railways, started re-construction work on the main line in December 2018 and introduced a new timetable in October 2019, which, for the first time, included some line closures. So the photogenic branch line from Nyaunglebin to Madauk is history and the last train that ran on this line was a FarRail Tours steam charter train. The semaphores at Bago and Pyuntaza may be no more, but there ARE still photographic jewels on the network of the state railway, and we will visit some of them on our trip. 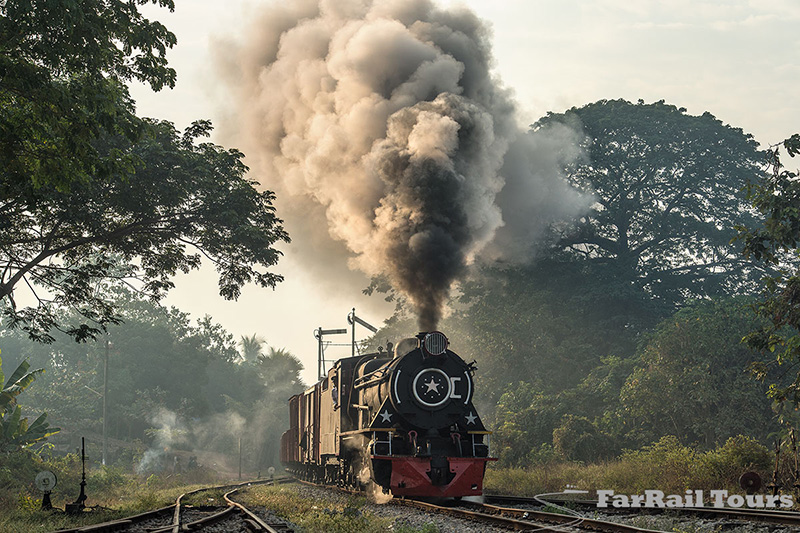 The new discovery of the year 2019 is the town of . It is located on the oldest main line of the Burmese railway system from to Pyay and from Letpadan a line branches off to the formerly important ferry jetty of Tharrawaw, which has several very photogenic bridges en-route. In addition, we will drive far to the south, to Thanbyuzayat, where the death railway to started, and on even further south. 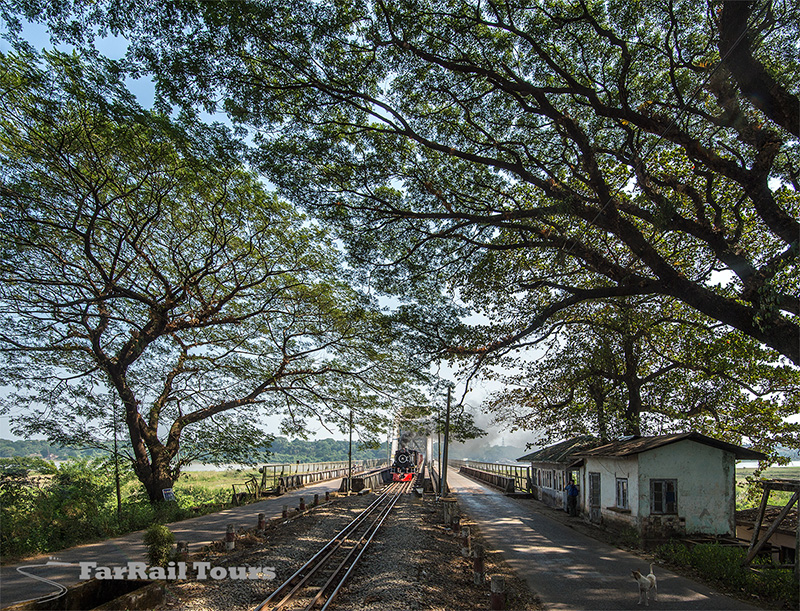 Both lines mentioned above have never seen a steam charter train before, so we are entering an exciting new era. Of course FarRail, will, once again, have to invest in infrastructure facilities. In Letpadan they last turned a locomotive at the beginning of the 1990s, when steam locomotives were still seen here, so much must be done. But Letpadan is colonial railway infrastructure at its very best and is therefore right at the top of the agenda for our next visit. Wagons are not a problem following the major refurbishment program we initiated, so we will experience authentic looking trains against an historic backdrop on incredibly photogenic lines most of which haven’t seen steam for decades. 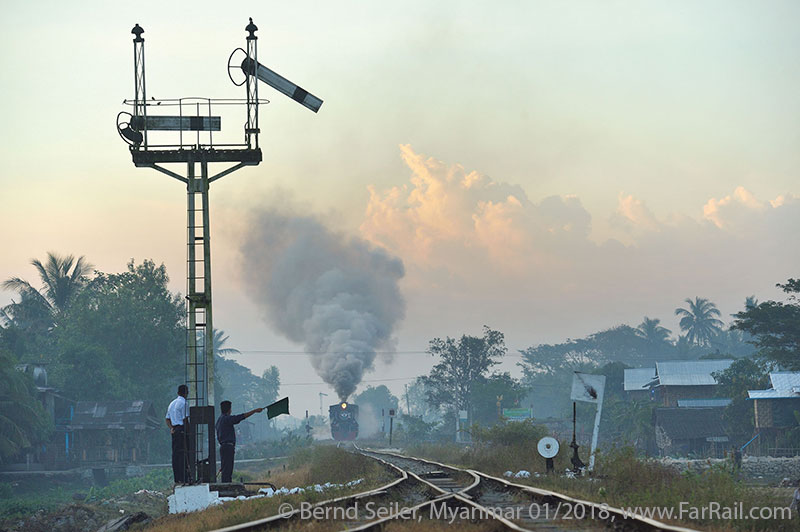 Moon Festival in Taunggyi, and Bagan 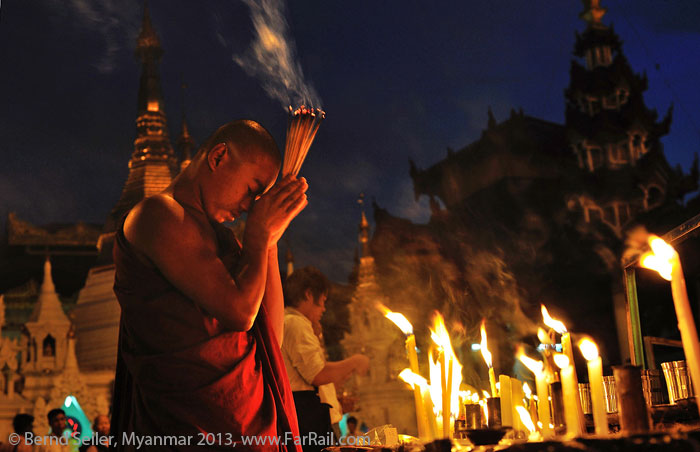 Bago (the town was previously known as Pegu) was one of the last steam sheds of . They served two lines, the first of which headed to Mottama, southeast of Bago. Initially it is flat but not without photographic potential. Beyond the mighty bridge over the (photography prohibited for many years but now possible), hills appear. At Mokpalin, there is a small, barely used shed with a turntable, made serviceable again for our group. Locos can take water and can be serviced here. Further on, the railway comes closer and closer to the mountains and between Thaton and Mottama the line becomes very scenic. There are no steep gradients, but the scenery is outstanding, especially in the afternoon with the light from the "right" side. Mottama itself used to have a small loco shed. After the opening of the bridge to Moulmine this shed was almost shut down but still hosts a crane and an armoured railcar. For us they’ve rebuilt the long out of use triangle from scratch to enable us to turn our locomotive there. 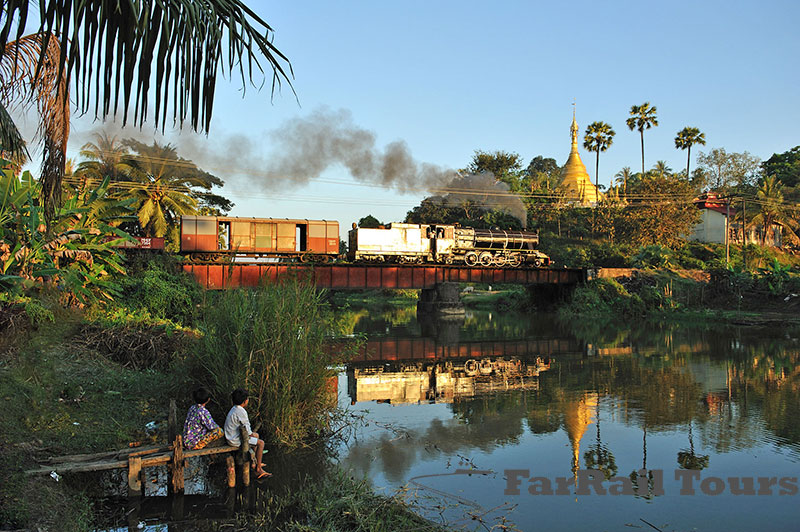 Further south to Karoppi we will find large salt lakes for extracting sea salt. This area is a perfect playground for shots with the sunset and in the last light as we expect several of the extraction fields to be filled with water.

The Tharrawaw – Letpadan line runs through the former Irrawaddy riverbed, 's largest river. The country is flat, but numerous former tributaries had to be crossed by means of very photogenic filigree, bridges. Letpadan station is the “jewel in the crown” of this trip. Signal boxes decades old complete with rodding probably over 100 years of age. A dense array of semaphores at the northern end of the station, a pagoda and a mosque right at the southern exit and the usual hustle and bustle around the station are the backdrop for some incredible photographic opportunities. Here, we can easily spend a whole day without running out of potential. We have brought the turntable and the access track back to life after almost three decades out of use. 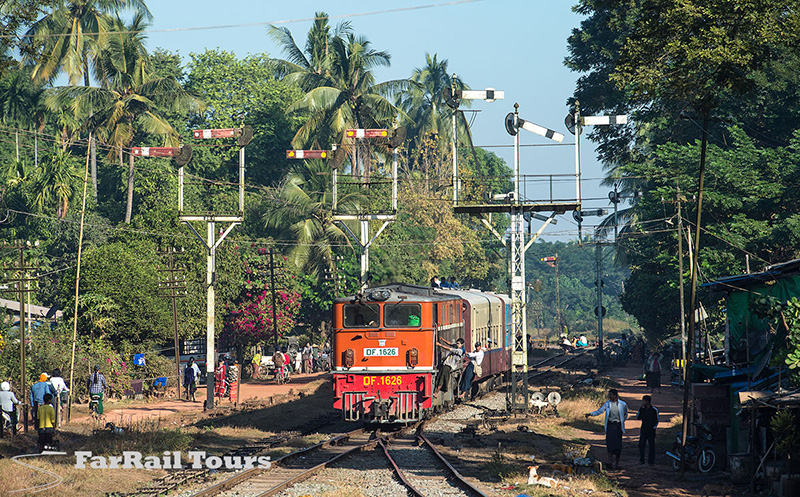 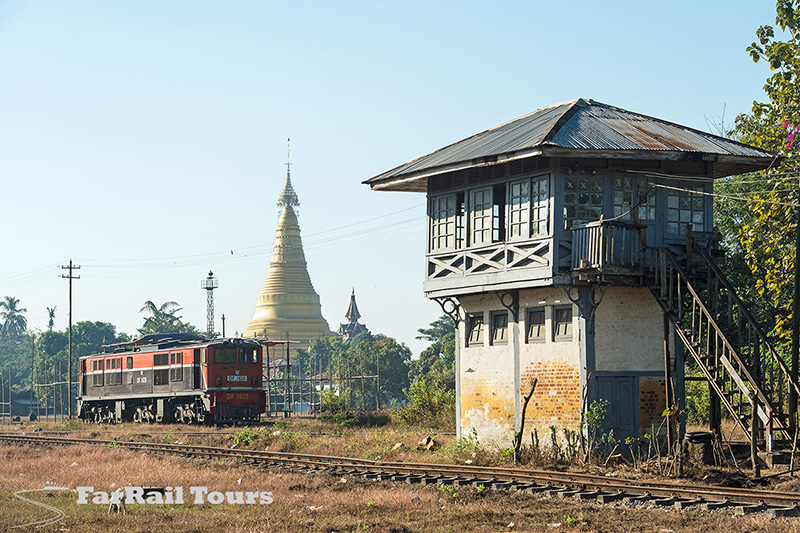 Some of these rarely used locomotives have reduced boiler pressure and so can’t handle the same weight as in regular service days and we must be a little concerned about their staying power. Crews are not so skilled anymore and the overhauls were all done within a tight budget. But they are ready for light passenger trains with around three to a maximum of five coaches and/or a sensibly authentic freight consist. So please expect the possibility of delays not only from the operational perspective (they are very common in ), but also from a reliability point of view. It can’t be guaranteed that anything will work exactly as planned but to reduce the risk we’ve ordered two different locomotives at Bago. The second loco can help out if the first fails. Just remember that we’re there more than a decade after the last fire was dropped on regular steam. However, on ALL of our tours since January 2017 everything worked out fine and the three locos performed almost perfectly.

We have three serviceable locomotives. There are two 2-8-2 Mikados of class YD and one 4-6-2 Pacific of class YC.

We have requested and paid for the Myanmar Railways to overhaul a number of wagons and re-paint the passenger coaches we want to use, so our trains should look absolutely authentic!

A chartered tour bus will follow the steam trains. Occasionally we’ll travel by bus and follow our train, but usually we’ll board the train to get to most photo spots. Getting aboard the freight wagons is, sometimes, a bit demanding, but we’ll have ladders available for the non-athletes! 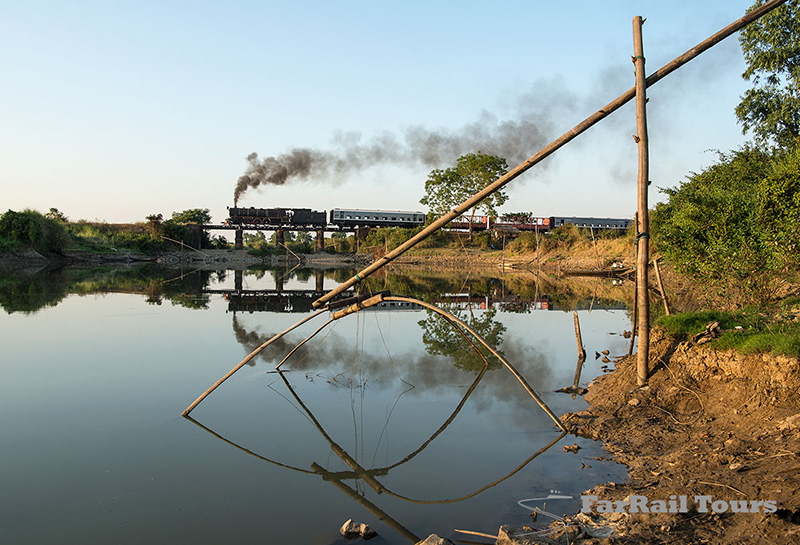 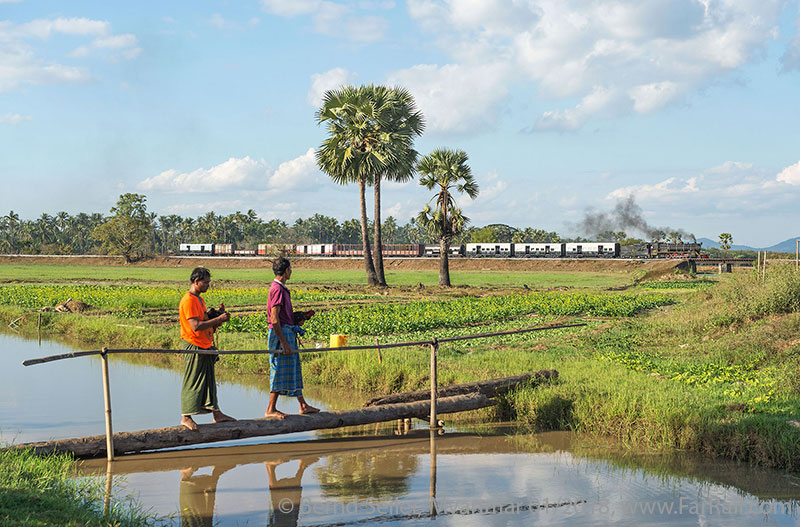 We all must accept the possibility of delays and patience and flexibility are essentials for all of us. FarRail has had to accept a contract with these provisos - so must you.

Time keeping in is “flexible” and there might be delays. However, our charter trains have departed pretty well on time. Charter buses (mostly with air conditioning), local aircraft, trains and accommodation are to the standard of our host country, are somewhat short of European, Australian or North American expectations. While we will try to avoid long walks but some photo positions may require a bit of extra effort. The itinerary is designed especially for both, still photographers and video film makers. To make the most out of the opportunities, we may change our route or hotels/guest houses if necessary. 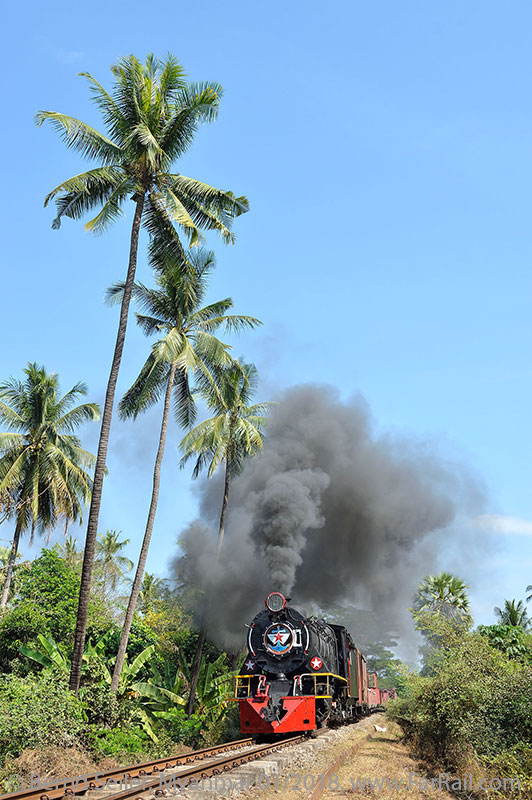 Usually our hotels are okay, but occasionally the standard of hotels in smaller places may be variable. Please be flexible and tolerant, but after you have seen and felt the quality of the roads, you’ll understand why we don’t drive enormous distances just to get to a better hotel.

Please note that morning trains have a higher priority than breakfast in the hotel, so breakfast may be served as a packed box if necessary. Lunch and dinner are planned according to the needs of the timetable. If necessary, we’ll buy papayas, bananas and oranges instead of risking missing some good pictures because of a time-consuming restaurant stop. Excellent lunches, with local fruit and rice and curries are usually available in the small stations along the railway too. Beverages are not included in the tour price. 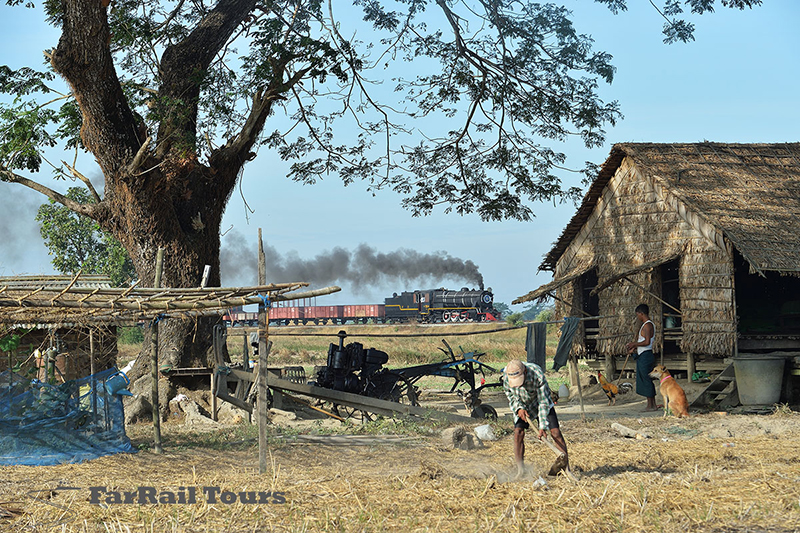 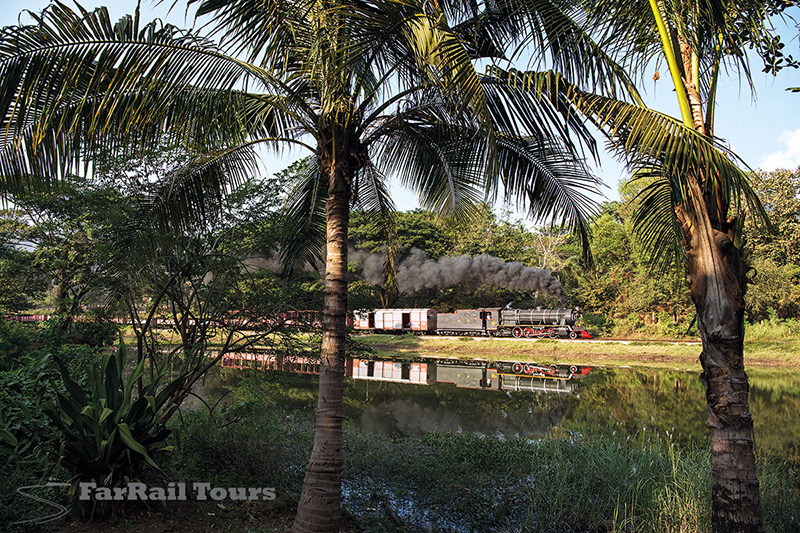 Always use common sense when crossing roads and railway tracks. For instance, if you walk on dark streets during the night please take a good torch with you. Neither the local tour operator, Myanmar Railways, nor FarRail Tours can be held responsible, and will not accept any liability whatsoever, in the case of any accident or illness, damage or delay etc. We suggest you take out a comprehensive overseas accident and health insurance policy.

We recommend that you take some US dollars with you, and change money at the airport for souvenirs or beverages etc. Most major currencies, such as Euros or British Pounds, are ok as well. With about $120 US you should easily be able to cover all out of pocket expenses. 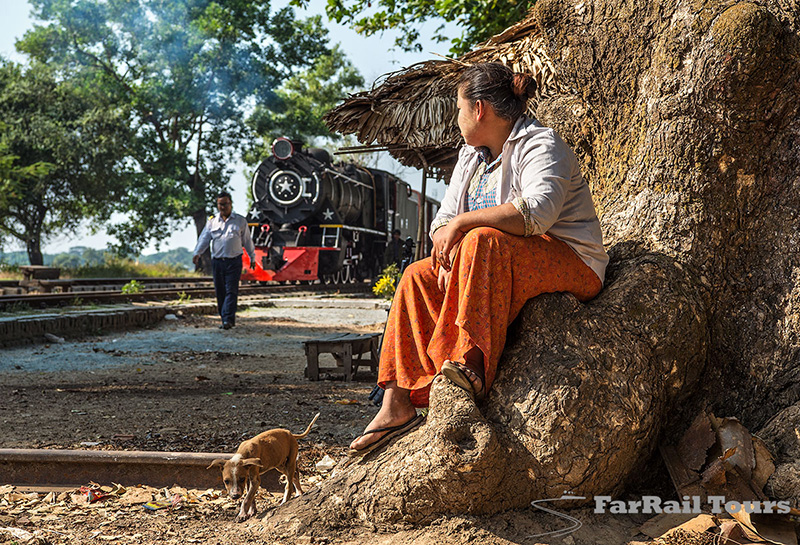 Charging rechargeable batteries in the hotels is usually not a problem. Sometimes there’s a power cut, and the hotel’s generator set is not able to deliver the same voltage as the national network. Therefore, recharging batteries can take a little longer than usual but no one has ever missed a picture on our recent trips because of battery problems.

Despite any difficulties we might face, you’ll be very pleasantly surprised by this lovely country, it’s friendly and welcoming people and above all an amazing railway infrastructure, preserved for the moment as it was, simply amazing photographic backdrops and with a program of steam activity quite remarkable for 2020.

Bookings after the registration period expires are possible at a premium of £80.

As the state railway will recalculate their prices at the end of 2020, the price shown is so far only an indicative price. The price of the cultural part of the journey has not yet been fixed. 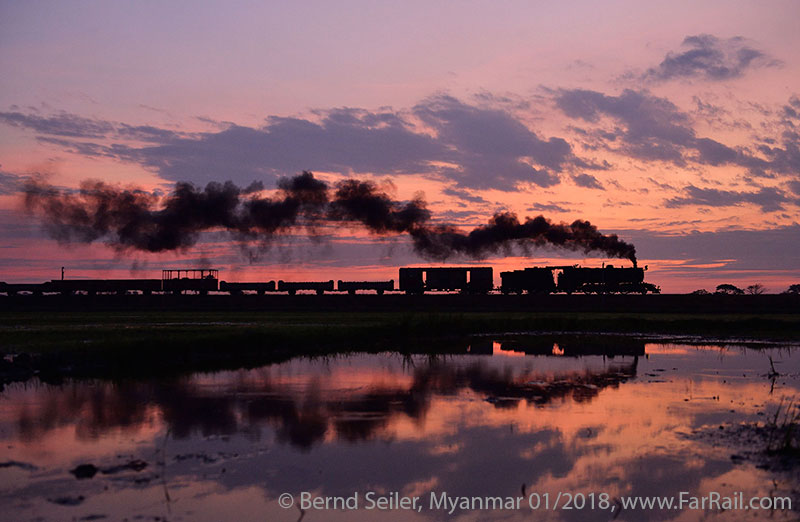