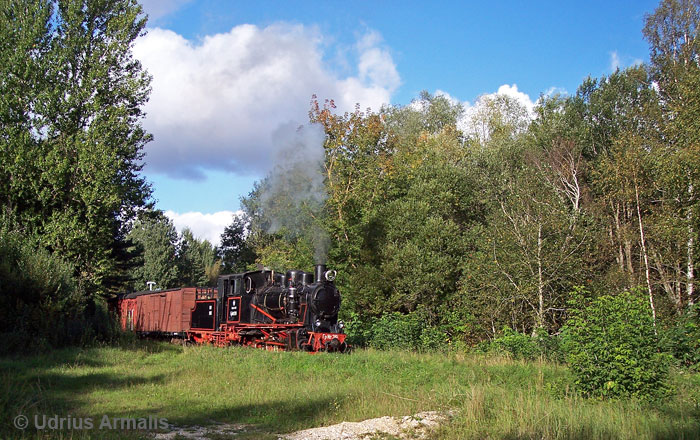 Three serviceable narrow gauge steam locomotives are available in the Baltic states. Because they are owned by and usually based in the railway museum in Lavassaare, where they have only a very short piece of usable track, we’ll transfer one of the locomotives to the 68 km long line Panevezys – Anyksciai – Rubikiai. A second locomotive is on the last public narrow gauge line of Latvia at the moment: Gulbene – Aluksne. Both lines are long enough to offer good opportunities for photographers and video film makers. The locomotives are wood fired.

The landscape in the Baltic region is mostly flat with some gentle hills, consisting of lakes, rivers, meadows, swamps, forests and wide agricultural areas. That's the reason many narrow gauge lines don't have gradients. However, we can find a lot of interesting smaller and a few larger bridges. Sometimes we’ll see wooden houses or beautiful wooden station buildings along the line. Not to forget the typical water towers! It's possible to take pictures in really idyllic countryside. To get an idea about the countryside please have a look at the pictures in the trip report of our tour to the narrow gauge railways in Lithuania in 2005. Of course, that time, we didn’t see any working steam. 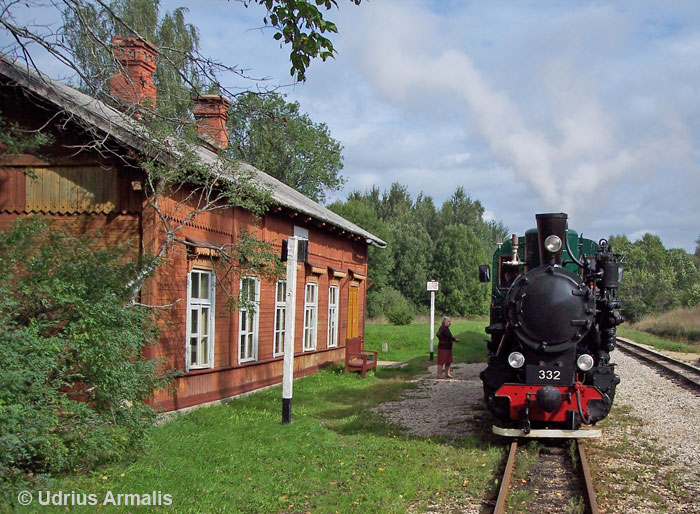 Latvia's last remaining public narrow gauge railway Gulbene – Aluksne runs four pairs of trains, on Sundays two pairs. These trains are, of course, diesel hauled. But the German built 0-8-0 tender loco class Gr from the Lavassaare museum is currently a guest on this line. So we’ll take advantage of the situation and try to grab some of the few remaining freight wagons and the Polish Pafawag coach to arrange an authentic train from the age of steam.

There is only one station along the line where trains can cross each other. Fortunately, the timetable allows the running of charter trains during the best time of the day for photographers and video film makers.

In Gulbene we’ve planned some night shots in the depot where we’ll also turn the locomotive. The morning train is arranged for some glint shots in the rising sun.

In Anyksciai there exists a small railway museum with some plinthed steam locomotives. Unfortunately, none of them is serviceable. However, there are a few freight cars (one wooden, the rest a bit more modern but still authentic) which can be used, after an overhaul, for our charter train. All we need to do is to get a steam locomotive to this long narrow gauge line. So we’ll transfer a Kch4 by road to Anyksciai from where we can operate it. Doing the whole line in one day would be possible, but would limit our chances of getting good pictures. So we’ll run the first day in the afternoon light from east to west and we’ll use the early morning light the following day to try some shots with the sunrays reflecting on the locomotive. For the evening we’ve planned some night photos in Anyksciai. 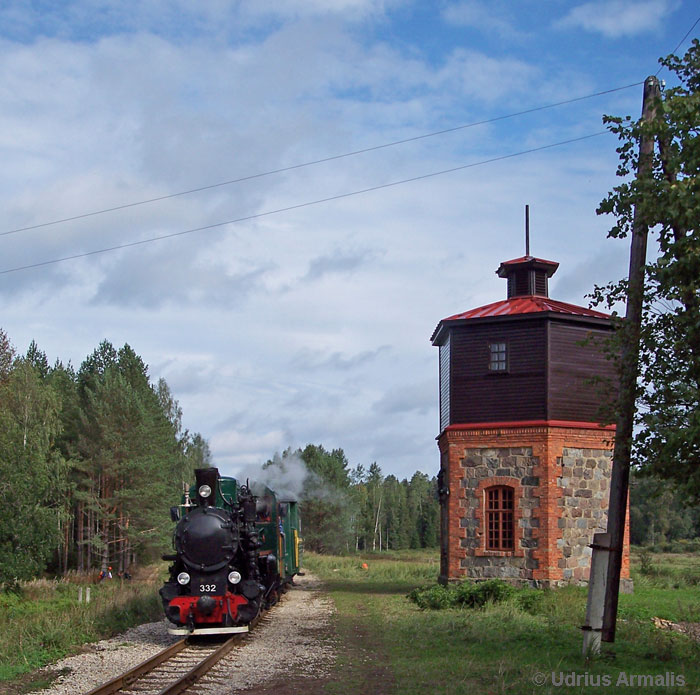 The third line in Ventspils is a very short course. But this 600 mm gauge line in a fishery museum has a serviceable 0-4-0 “Brigade locomotive” from World War I (built in 1914) and two green coaches which suite the age of the locomotive. The nice little train can be photographed under trees and passing meadows. We’ll spend about two hours with this interesting train before we return to the airport of Riga.

Usually Estonia, Latvia and Lithuania are mentioned in one breath as the “Baltic States” and this suggests that these three states are very similar. But that's not the case! Western and Southern Estonia are like a Scandinavian country, Finns and Estonians can understand each other because their languages are very similar. Latvia, however, is bilingual. The Latvian language is similar to the Lithuanian, but most of the people speak Russian. And if you come to Lithuania you’ll feel more like you are in Central Europe. In Lithuania people don't like to remember the Soviet times and English and German are popular foreign languages. In Latvia Russian is still the no.1 foreign language. 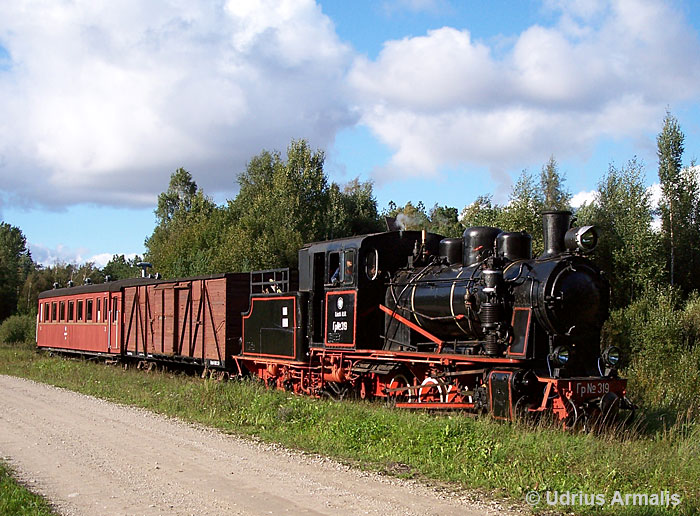 Infrastructure has nearly reached Western European standards. Not so the smaller roads, they are often unpaved and require more time for travelling than a view on the map would suggest. The mobile phone network has nationwide cover. Local currency can be acquired easily from cash dispensers in every larger city. All major credit cards and EC-cards are accepted.

Our hotels in the small places are between better than basic and middle standard (although they charge western prices). All of them are clean and offer a private bathroom.

For this tour you need good and strong shoes and waterproof clothing. We go on our tour at the end of the summer, a few weeks before the wet season begins. But rainy days are also possible in September. Light conditions are great in the early morning and afternoon because of the low but intense sunlight. Because this tour is designed for photographers and video film makers it’s not appropriate to wear intensely coloured clothes. If someone gets accidentally in a shot he could cause a real upset if wearing high visibility jackets.

The tour is arranged with half board (breakfast and dinner). We will usually begin the day early in the morning and may have no opportunity for a warm lunch. On demand we can arrange a packed lunch instead.

There is only one serviceable locomotive on each line available. In the case of derailments, technical problems with the locomotive or the line, there’s no alternative. It’s impossible to guarantee that all locomotives and trains will run as planned. In such an unlikely case we’ll try to arrange something else. Refunds are not possible, even if the program can not be executed as planned. 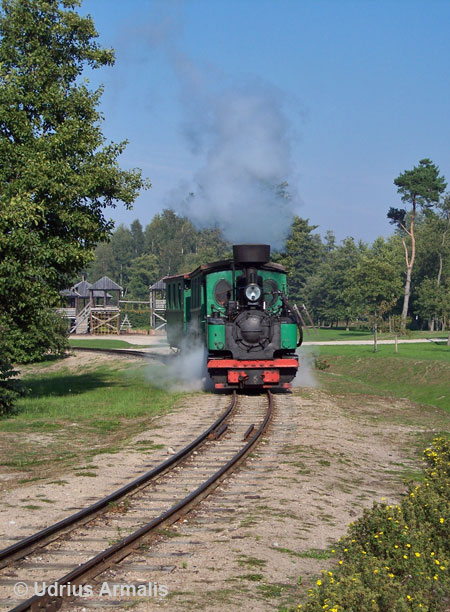 Please bear in mind that the narrow gauge trains we’re using are not to the standard of museum lines in western Europe. They offered coaches which would fulfil EU requirements, but we’ve ordered authentic trains and rather than museum like rolling stock with fancy painted bar coaches. The freight cars don’t have proper seats, but emergency seats or benches are arranged for our group. Always use common sense when crossing roads and railway tracks. FarRail Tours cannot be held responsible and will not accept any liability whatsoever in the case of any accident or damage. We suggest you take out a comprehensive accident and health insurance policy.

Currently (January 2009) Air Baltic offers return flights from Berlin to Riga for just 130 Pounds. We can book your flight from any airport. Please advise while booking the tour.

DISCLAIMER
As a service to our UK-based clients FarRail Tours accepts and will continue to accept payments made out in Pound Sterling until further notice. However, please note that from January 28, 2009, all prices quoted in Pound Sterling are indicative only and are subject to change without prior notice. This measure was taken by FarRail Tours due to the unprecedented volatility in the international foreign exchange markets and its impact on the valuation of the Pound Sterling versus other major currencies, namely the Euro as FarRail Tours' accounting currency. 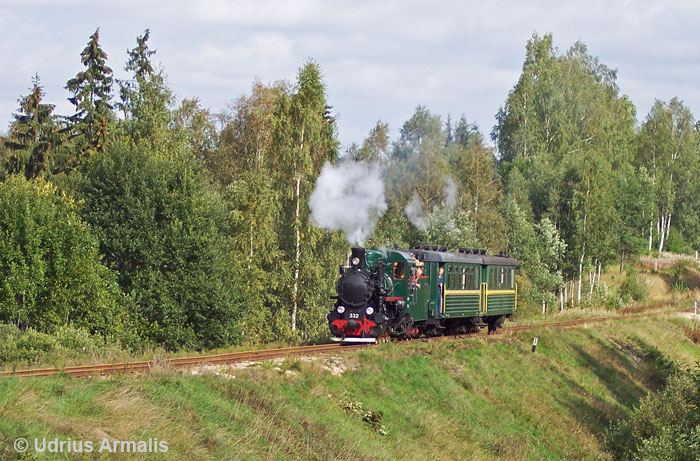