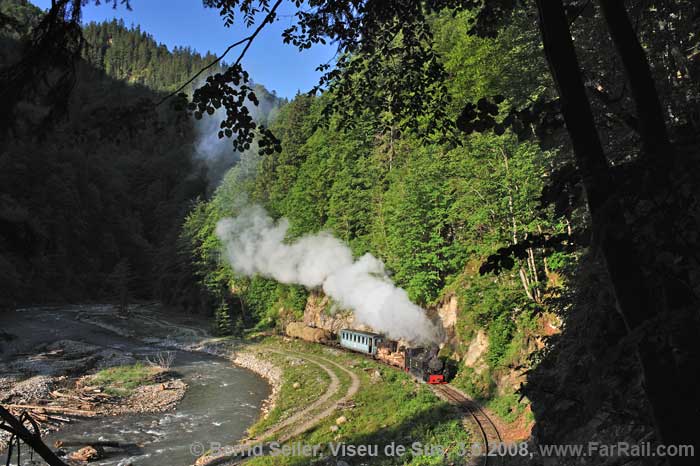 After so many successful tours in autumn and winter we want to visit the Romanian narrow gauge lines again in spring, when the meadows are in blossom and nice positions which are in the shade the rest of the year are sunny spots.

Until the early 1990’s, forestry lines were still common in but, shortly after the political changes, one after the other, the lines disappeared from the map. Of the last remaining forestry lines only one, Viseu de Sus, is still in commercial use but nowadays is operated by diesels. They have established a steam operated tourist service though the locomotives and the coaches are authentic but new to the line. The Moldovita line was almost abandoned and the parallel gravel road has been paved in recent years. Fortunately, railway enthusiasts, led by Georg Hocevar, have rebuilt several miles of the line. We’ll arrange authentic steam trains, turning back the clock on these fascinating railways. 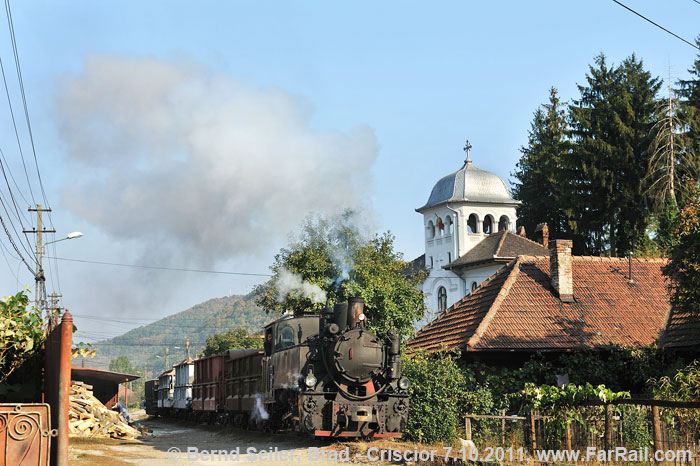 The best opportunities for good pictures and videos can be found on the 40-plus km long line of Viseu de Sus. The other lines are less than half as long as this river valley line from Viseu, but still offer a good variety of opportunities and some very interesting situations for pictures.

A feature of this trip will be a night in the mountains. We’ll visit a forestry log cabin and go to where they cut the timber. The logs will be brought to the railway by horses and probably loaded by hand. For more than two decades this is no longer the normal operation but it is how it used to be. So our focus is not only on the line and the steam trains, but also we’ll take videos and photographs of logging activities. 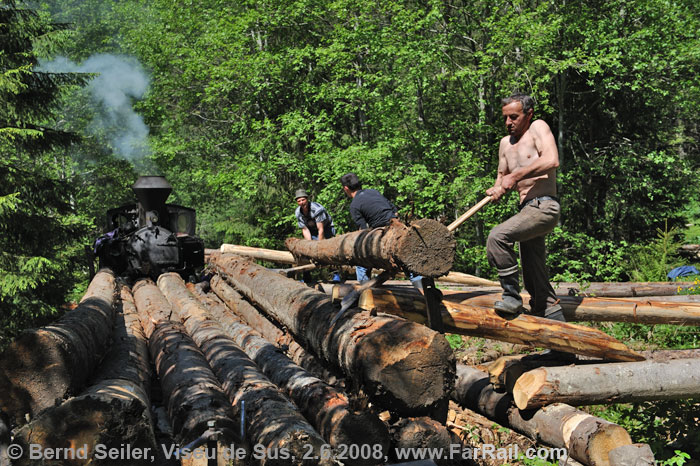 In addition to the forestry lines we’ve added the steam operated industrial narrow gauge line of Brad – Criscior and a section of the former state railway operated narrow gauge line of Turda – Abrud. In Brad we’ve chartered an authentic freight train with a Resita locomotive and about five freight cars, just as it used to be some 30 years ago. This few kilometres long line hasn’t seen many changes over the last decades. It’s an industrial line, completely different from the forestry lines. The Abrud line is surrounded by mountains and offers plenty of good opportunities. We’ll probably run an authentic short mixed train here.

The use of a particular steam locomotive cannot be guaranteed. We can count, however, on the talent and improvisation of the local crews and we hope to be able to use the equipment we want.

We’ll see different types of locomotives in use. In Viseu we’ll use one of the almost “indestructible” locomotives and their 1980’s copies by Reghin. For the Abrud-line we’ve chosen the Budapest built 0-8-0 tank locomotive, 764 243. We’ll not use fancy passenger coaches or open cars with seats on, but authentic rolling stock. 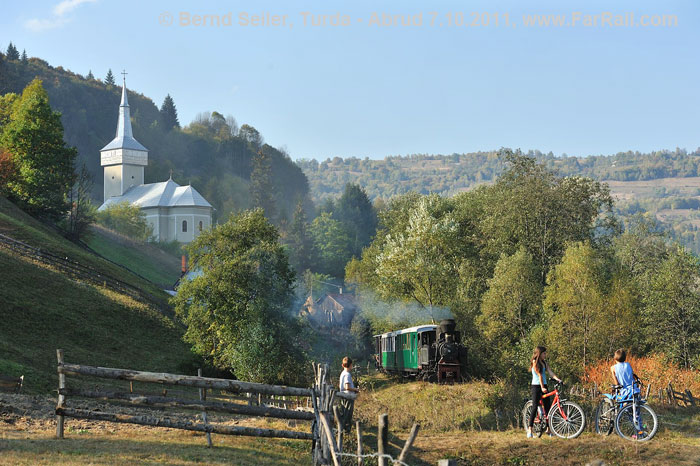 On this tour we’ll visit a place where logs come from. This requires a short walk through the forest or recently deforested areas. If you don’t want to see the cutting in the forest you can also wait at the railway line where the cut logs will be probably brought to by horses.

The narrow gauge forest railway of Viseu de Sus is the last remaining one in operation in . Besides diesel engines, steam locomotives are still serviceable, mostly the Resita-built 0-8-0T or their Reghin-built counterparts. In Viseu de Sus steam is not used on a regular basis any more but is still used for tourist trains. 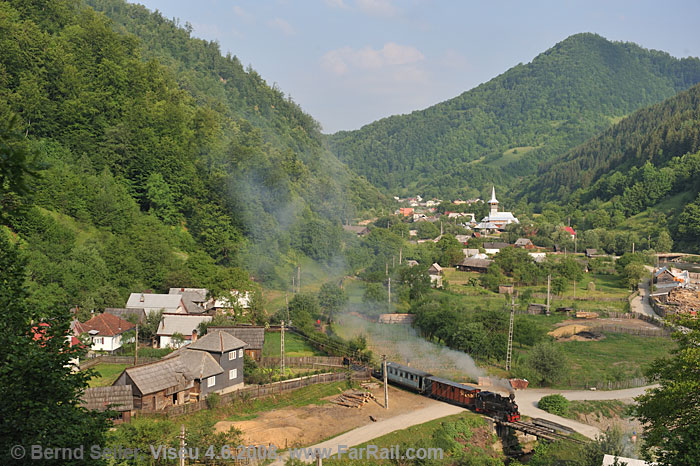 The main line starts in Viseu de Sus at the large sawmill and runs steadily uphill for 43 km to Coman at the Ukrainian border. All branch lines are history except a small branch which can’t be used for steam trains. The line offers plenty of opportunities for good pictures. There are three tunnels very close together but sadly none of them can be photographed in sunshine.

Not only is the landscape something special, the trains in themselves are also really interesting. We will try to make up authentic trains, as they ran in the eighties, when the line belonged to the state run forestry railway CFF (Caile Ferate Forestiere) and when it was worked exclusively by steam locomotives. There are several original coaches back in service, so we are able to haul an authentic passenger train. Besides the locomotive, and original four wheel tender and passenger coach we’ll carry several empty trucks for the logs uphill to the loading points. Sometimes there are forestry tractors or other machinery that will have to be brought up into the forest. This equipment is often carried by the railway as well. We don’t have a direct influence on the train dispatching but our chances of getting an authentic train behind the locomotive are quite good. On our previous trips the train has looked 100% authentic. 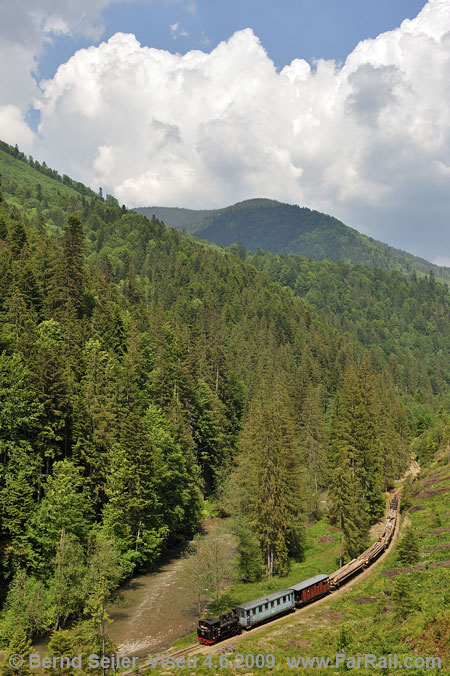 At the intermediate stations, during unplanned stops (to raise steam pressure or get one of the log bogies on the track again!) and stops for taking on water, we will have the opportunity to take pictures of the train and its surroundings. Lots of shunting activity can be seen as they leave the log bogies at the loading points. In addition we’ve planned some runpasts along the line.

But remember, some things about the tour are unpredictable. Please expect the odd delay, shortages of wagons and couplings for the wagons, derailments, inaccurate or no information and so on. We’ll try to sort all these things out in advance but experience tells us to expect the unexpected. However, things usually work out in a very satisfactory way. So as on our previous trips: we’ll need to arrange things on the spot, try to get the wagons we want and find the best opportunities together with the local railway staff, who will be as helpful as they can be.

We’ll try to get a loaded train and bring it down to the sawmill in Viseu de Sus. 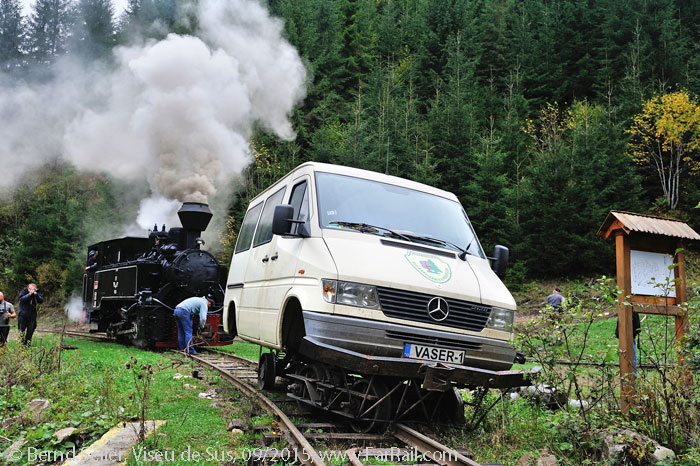 Moldovita was a really nice forestry line. In its last years of operation they used a (764 449) and the 0-6-0 inside frame 763 193 locomotive from Krauss/Munich. The small engine was not only the main attraction of the line, it also was amazing what this little, 50hp engine was able to pull and push uphill over the steep gradients of the line. It’s a little miracle that this unique engine has survived. It’s plinthed in Viseu de Sus. The forestry line was closed and abandoned under doubtful conditions. However, because of a few railway enthusiasts, in particular Georg Hocevar, the remains were preserved, and with the help of other railway enthusiasts a part of the lower section of the line was refurbished. The length of the line was reduced to two kilometres just before they started to save and preserve it. Now they have rebuilt the first eleven kilometres.

We’ll make a visit to the depot where our loco will be fired. Along the line we’ll pass several old-style wooden houses. Unfortunately, the parallel road has been paved in recent years. However, there are still plenty of nice pictures possible. 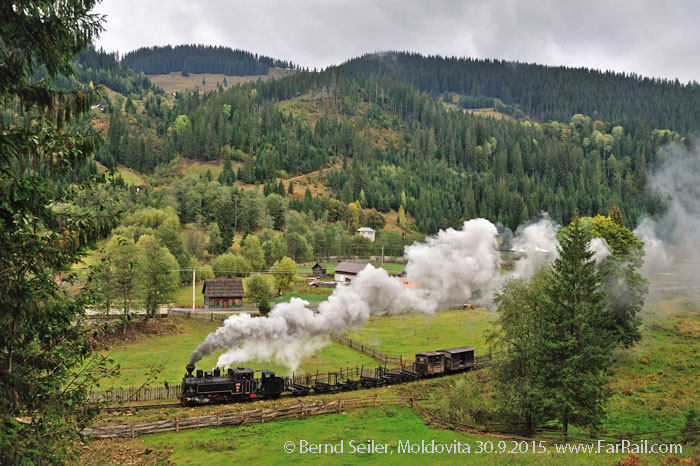 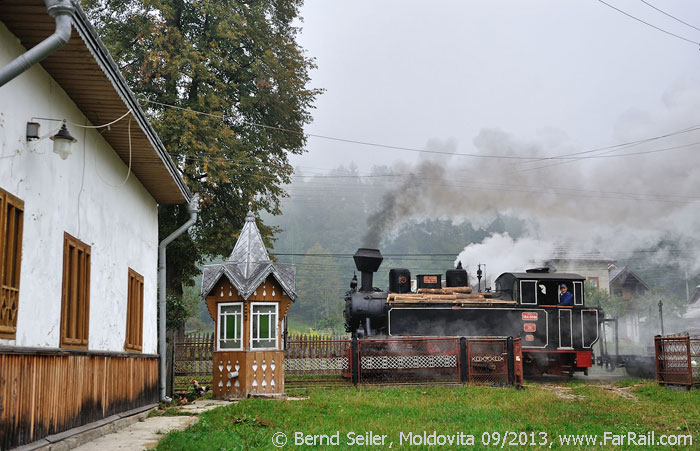 Brad – Criscior is a short industrial line from the state railway station in Brad to an industrial complex for repairing and construction of railway and mining equipment and railway vehicles, in Criscior. The line leaves the state railway on a curve, passes a river bridge and follows a small road in a populated area. Close to the terminus, a large industrial pipe runs parallel to the line, as was the situation 30 years ago. The scenery in this part is really ugly … so ugly, that it’s become photogenic again!  But in the first section of the line you can take some nice countryside shots. We’ll form a train out of about five coal hoppers and the local locomotive. This train composition was used for many years in regular service. We’ll travel on the open platforms of the tipper wagons. 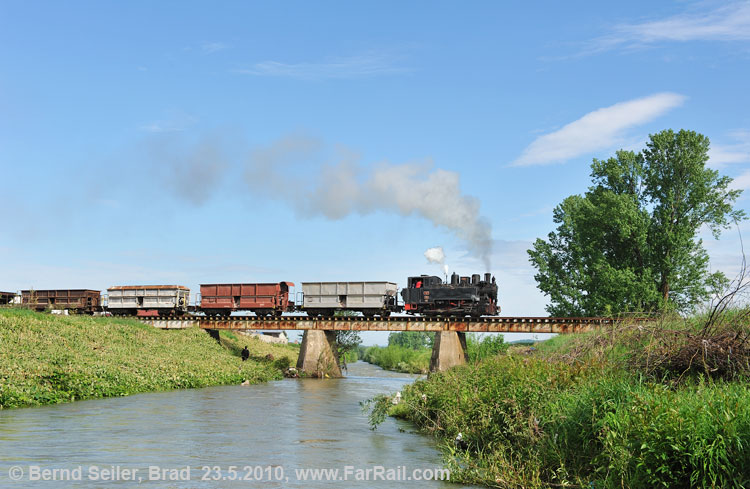 The former state railway operated narrow gauge line from Turda to Abrud is still serviceable in the short but very scenic section from Campeni to Abrud. This part of the line is surrounded by mountains. Especially photogenic are the little, rural villages along the line which haven’t changed much since 1990. A white painted, wooden church is sitting in the valley of the railway – just perfectly placed to include it in the picture. In autumn, the locals cut the meadows to prepare food for their animals in winter. They still pile this up  in the traditional style, so we may find some hay stacks along the line. Something like this is almost extinct in Western Europe these days. The classic is still a very traditional country! 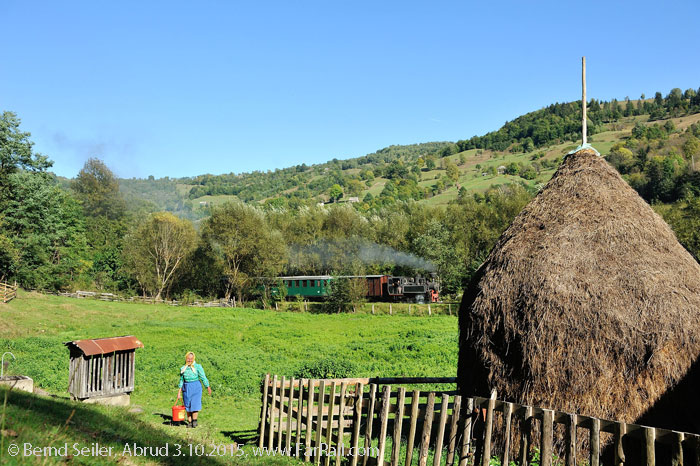 is a new member of the European Union. This has brought a lot of change to the country but in the small villages along the lines we can still experience the traditional and its hospitality. Serious crime is almost unheard of - our accommodation is either family run or nice budget class hotels and all offer a warm shower and reasonably good food. The night spent in the mountains is in basic accommodation, which is quite clean with basic washing facilities. We’ll stay in dormitories. There are no single or double rooms available for this night. You can charge your batteries in this guesthouse.

The use of a specific locomotive cannot be promised on any line we’ll visit. In Viseu we will use steam engines for the regular trains depending on their availability. At the moment we don’t know which steam locomotives will be operational. The engines built by and Reghin seem to be almost “indestructible”, so the local workshop should be able to solve any problems. For the Budapest locomotive in Abrud, we’ve no substitutes. If the loco fails we can’t offer another one. Because of the high costs of bringing the locomotives to the line to Abrud there is also no refund possible if something goes wrong and steam operation cannot be delivered. On this tour we have planned several events which can’t be guaranteed in any respect. Neither the horses, nor the manual loading process or the number of wagons or a specific locomotive can be guaranteed. 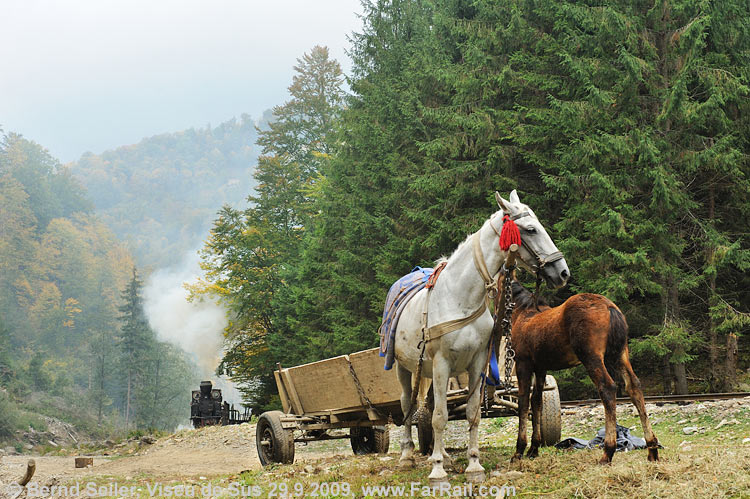 In our pensions and hotels there are sufficient power supplies for battery charging. In our accommodation in the mountains, there is no cell phone signal available (luckily).

Health: no problems exist concerning your health. The water from the numerous springs along the line in Viseu can be drunk without a problem; even the small streams just above the first village have clear and drinkable water. The only serious health risk is if you are not careful around an operating railway. Jumping up or down from moving trains is not allowed. Getting on or off, and travelling on the train is at your own risk, so take care along the railway. Wear good sturdy shoes.

For this tour you will need a valid passport, EU citizens only a valid ID card. A visa for citizens of the European Union is not necessary. For citizens of other countries (by then probably including the UK) please contact your local Romanian embassy for details. 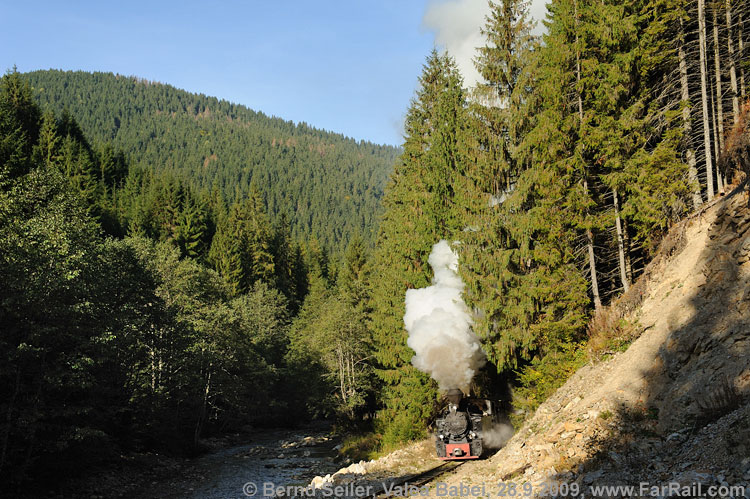 You’ll need little local currency. Food, if not included, and beverages are quite cheap. In Viseu we’ll have some things on the train, including hot coffee.

The tour is planned with the dedicated photographer and videographer in mind.. 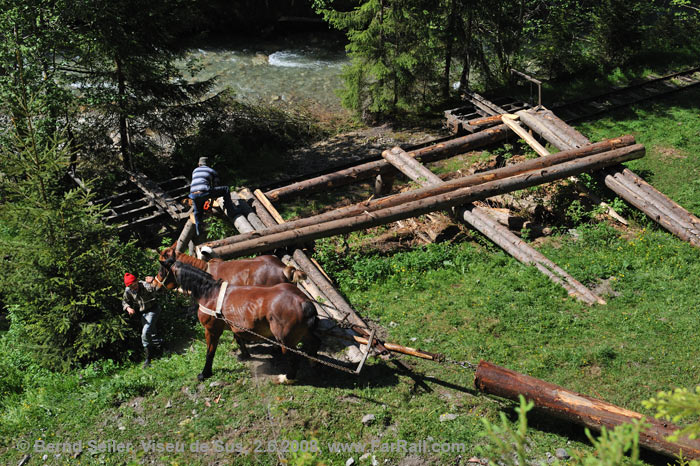 Please remember that the accommodation, buses and the forest railway itself do not necessarily conform to current EU-standards. That’s exactly one of the reasons why we are going there. Safety and environmental standards are still not fully developed so a word of warning - please beware of the dangers in and around the railway and other modes of transportation. An accident and health insurance policy covering foreign countries is essential including of course trip cancellation provisions should you not be able to travel at the last minute.

Neither FarRail Tours nor the local operators can be held responsible for any accidents, delays etc. 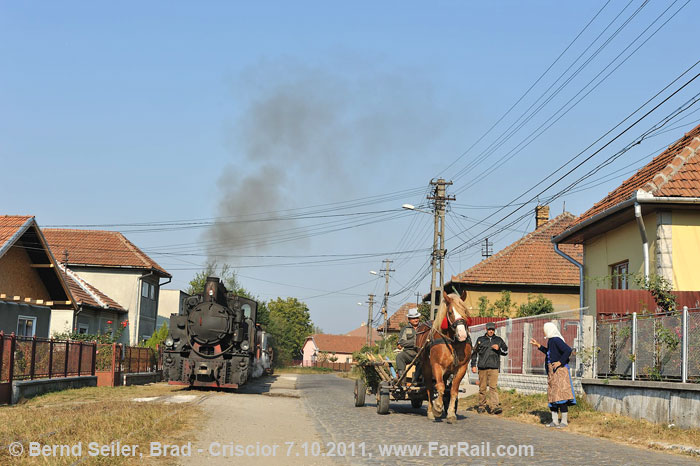 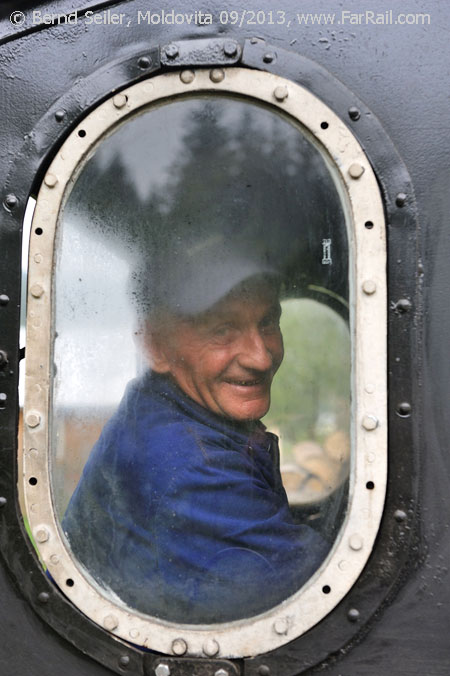